Maribel Boone is the subject of fireman Kirk’s unrequited longing. The big guy, known as Thor for his size and blonde good looks, is tongue tied around his crush, barely able to speak more than a few words to her. It’s hard to court someone when you are only saying eight words at a time.

It’s not like he was saying anything Kirk hadn’t told himself a million times, lying awake, sick from chemo, his surgical wounds throbbing. He’d formulated the words many times. “Would you please meet me after work? I have something important to tell you.” But as soon as he’d seen her today, with that delicious Titian-red hair in an unruly pile on her head, her dreamy hazel eyes widening with surprise at his compliment, the telltale color coming and going in her apple-round cheeks, he’d gone mute, as he always did.
Maribel left him speechless. Which didn’t give him much of a chance to bare his heart to her.

Maribel has been dating the same guy for years. She’s been engaged to him for years but he’s never set a date. Maribel has been content in this situation, raising her son, Pete, and having her fiancé, Duncan, visit when he can take time away from his celebrity photography business. Maribel wonders why Duncan choose her over all the beautiful women to whom he has access. Unacknowledged is the ego boost Maribel receives being this famous man’s fiancé. (She calls it awe, but I don’t think that’s quite the right emotion) That’s about the only reason why I think Maribel must continue her relationship with Duncan particularly when she finds him boring and how he belittles her amateur photograph attempts. 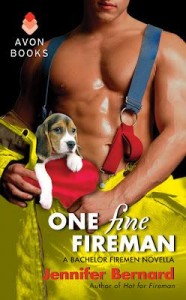 Part of the story is told from Pete’s point of view. He, of course, hates Duncan whom he perceives as fake. He doesn’t want to move to NYC. He wants a dog and he wants to fix bikes with Fireman Kirk.

Maribel spends much of the story engaged to Duncan yet spending intimate moments with Kirk and being embarrassed about her crush on him. Her tepid feelings toward Duncan and her much warmer feelings toward Kirk made me impatient. When Maribel is longing to know what the texture and a feel of a kiss from Kirk would be like but not questioning her feelings toward marriage, it’s obvious to the reader it is time for her to move on. Her awareness of this doesn’t arrive until later.

This was a novella and the usage of Pete as a narrator and the existence of a fiancé for a good portion of the story left the romance between the two main protagonists without much meat. Throw in Kirk’s status as a cancer survivor and a suspense scene and it was really too much in such a short space.

What did work well were the characterizations and the sweet tone of the story. C