REVIEW: Of Metal and Wishes by Sarah Fine 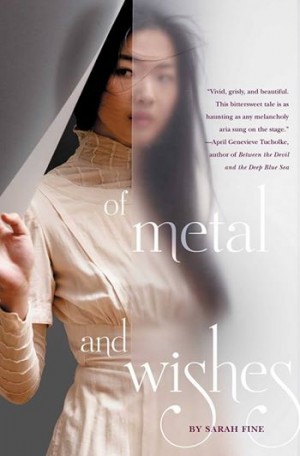 When it comes to YA speculative fiction, I’ve been looking for something different. I’m meh about urban fantasy and paranormals. I’m just about done with dystopians. And many a science fiction title has earned my side eye, because they were dystopians in disguise! But when I read about your novel, Of Metal and Wishes, I was intrigued. Interesting titles go a long way with me! Also, there’s an Asian girl on the cover and she has a face!

(I know five years seems like forever in internet time, but I remember the Liar cover controversy. This is progress.)

After the death of her mother, Wen leaves her family’s picturesque cottage to live above her father’s medical clinic located adjacent to a slaughterhouse. Instead of embroidering fabric, she now sutures wounds while assisting her father. It’s obviously a huge change in circumstance.

The slaughterhouse is in turmoil. Hungry to increase profits, the factory bosses have brought in foreign workers as cheap labor. As you can imagine, this only stirs up the latent class and race issues. Further complicating things is that a ghost supposedly haunts the factory, granting wishes to those it deems worthy. A skeptic, Wen demands the ghost prove its existence — which it does, in dramatic fashion.

I would say Of Metal and Wishes is a cross between Upton Sinclair’s The Jungle and Phantom of the Opera. Wen is torn between Melik, a charismatic foreign worker, and Bo, the factory’s ghost. It is presented as a love triangle, although it is very obvious where Wen’s true affection lie (not-really-a-spoiler: with Melik). The relationship between Wen and Melik is borderline instalove — Wen comes to Melik’s notice when his friend trips her and lifts up her skirt. Yeah, classy.

This actually leads me to my main complaint about the book. There is a whole lot of rape culture. Wen is harassed and molested by one of the factory bosses. At one point, she is almost sexually assaulted. But it’s not just major incidents — Wen herself spouts some of the more insiduous beliefs. When she’s alone with Melik early in their relationship, she thinks that if something happens to her, it’ll be her own fault because she was alone with a boy. There is a parlor near the factory that is actually a brothel, and Wen slut-shames them.

In fact, I really wanted to like Wen. She likes stitching people up! She has medical training! This is cool. But when she’d shame another woman, I’d cringe. Why is this necessary? This also isn’t helped by the fact that she’s presented as the One Good Non-Racist person. Is it so much to ask to have a character who is not the Ultra-Exceptional One? To have a female character who isn’t put forth as awesome because She’s Not Like Those Other Girls? At this point, it’s tedious. I want to think we’re better than this in our fiction. That a novel can protray a teenaged girl having positive, supportive friendships with other girls. That a novel can feature a teenaged girl being awesome and being the star of her own story without having to put down other female characters too. I don’t think that’s too much to ask.

The worldbuilding is a little handwavy. Wen’s culture is clearly a Chinese-analog. I actually don’t think Melik’s people are meant to be white but with much being made of their paler skin, pale eyes, and red hair, I couldn’t help reading them as such. Based on the factories, the world’s technology is definitely industrial although there are elements of steampunk. In theory, this should all fit together nicely but overall I was left feeling disatisfied for reasons I can’t articulate.

The novel has an open-ended conclusion, which led to the discovery that this is the first book of a duology. I guess that’s better than a series, but I’m not convinced it was necessary. Perhaps more of the race and class tensions will be explored in the second novel, because I went in expecting more of that in Of Metal and Wishes. It’s not a cliffhanger, though, and in all honesty, I think the book stands alone well.

Of Metal and Wishes might appeal to people who love Phantom of the Opera for the similarities. I was more interested in the similarities to The Jungle, but I will warn that for a book written in a dream-like style, there is a surprising amount of blood and gore. Not surprising, given the subpar factory conditions, but for readers who’ve never been exposed to The Jungle, the contrast may be jarring. Overall, I don’t think this was a bad book but I do have many reservations. C