REVIEW: Not Your Ordinary Faerie Tale by Christine Warren

Robin used the word affability to describe Jill Shalvis’ writing and for me,  I would apply the same descriptor to your books.  They are generally affable with likeable characters and likeable settings, however, they’ve often felt truncated to me and this one more so than previous ones that I have read. 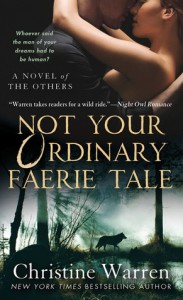 I understand that many of these stories have been reworked from their original novella forms but perhaps this one was never meant to be elongated because I sat down for a full length meal and only had an appetizer.  No matter how good the appetizer was, it wasn’t going to be fulfilling for someone who was looking for a complete dinner.

Luc Macanaw is directed by his Queen to leave the land of the fae and retrieve the Queen’s wayward nephew in  the human world. Reporter Corinne D’Allesandro is assigned a paranormal story by her editor, a story that leads her directly to the Queen’s nephew. Luc isn’t a big fan of the Queen but he’d never allow any harm to come to her and her word is law. When she sends him into the mortal world to smooth over any “ripples” caused by her nephew, Seoc’s, indiscretions, Luc goes without murmur. It is his duty.

Corinne knows all about faeries, vampires, and werewolves. Her three best friends have hooked up, married, and even been turned into an “Other” but she must keep their secret while still trying to maintain her distance from the Others. This becomes much more difficult when her newspaper editor wants her to check out a pixie or faerie sighting. Corinne wants to laugh this off as nonsense, even knowing the truth, but her editor is insistent.

Corinne doesn’t really care about most of the Others but she does worry what would happen to her friends like her Missy, a kindergarten teacher who married a werewolf, if knowledge of the Others was revealed to all humans.

Upon meeting Corinne, Luc was shocked at the surge of lust he felt. After all, he was surrounded by women who were more beautiful than any mortal woman could achieve. She was shorter, rounder, but none of that seemed to matter as Luc feels a compulsion toward Corinne. What’s this? Why yes, Corinne, the human, is his heart mate. Faeries have heart mates. OF COURSE THEY DO.

The best part of the book comes in the form of a few funny exchanges between Corinne and Luc.

The blankness dissolved beneath a surprised laugh. “You’re a fairy? Sure, Tinker Bell. Pull the other leg while you’re at it.”

Luc scowled at Rafe. “You see? That’s the problem with mortals. We leave your world for a couple of thousand years and everyone either forgets all about us, or they reduce us to little glowing balls of tutu-clad good cheer.”

But while Luc might speak Ye Olde English in Fae land (“I’m sure I could find a garderobe for you to clean if you so long for variety in your work.), he drops the formal dialect upon crossing over. Maybe that’s part of the magical process?

Corinne and Luc involve themselves in a little investigating, a lot of lusting, and thinking about the urgency of their situation (find the faerie before he does more crazy things in the mortal world). However, it’s just too little of everything.  Too little of the good natured humor, too little investigating and action on their designated task, too little worldbuilding.  It just lacked in substance.  The lust and sex the two pursued with one another seemed the primary focus and while I liked Corinne’s sex positive attitude, the story telling felt unbalanced. I never felt like I knew Corinne and Luc. Luc, in particular, seemed like a standard romance hero. Manly, attractive, good in bed, and filled with the protectorate instinct.

I wanted more than just the heart mate bond to draw the two together and other than sharing good sex, I wasn’t convinced that there were deeper feelings between the two.  The affability of the story helps maintain the reader’s interest, but it’s easily forgotten and not very fulfilling.  C