REVIEW: No Matter What by Janice Kay Johnson

HSRs are known to be issue books and sometimes the issues are so prominent that they overtake the book and that was the case for me in “No Matter What”. 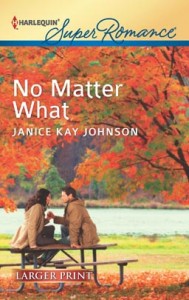 Molly Callahan has a fifteen year old daughter, Caitlyn, who is dating Trevor Ward whom Molly views as a trouble maker from her position as Vice Principal at the high school.  Trevor walked in at the start of the school year and turned everyone’s heads, even a few of the younger female teachers.  Fights with other students and a problem with authority makes him Molly’s last choice as a boyfriend for her good girl daughter.

Caitlyn becomes pregnant by Trevor, a replay of Molly’s own teenage pregnancy.  Caitlyn is told that she can make whatever decision she likes but Caitlyn’s decision to keep the baby is made fairly early on and any talk of abortion I felt was just a pacifying nod.

Ironically, I found this issue book to be both overwhelmed with issues that weren’t actually addressed and dominated by one.  For instance, Trevor’s issues of rage and internal anger expressed through sometimes violent fisticuffs are not really addressed. Wouldn’t Trevor’s loss of freedom, his impending fatherhood, increase his violent tendencies?  But Trevor’s troubles are subsumed by the larger issue of the pregnancy.

In an “issue” book, I feel we are being asked to assess the believability of the characters and journey with them through the various options, arriving at the one that is most suited to their characters. I did find the end resolution fitting to at least a couple of the characters, but the romance between Richard Ward and Molly never took off for me. It was convenient that the two fell for each other but I didn’t buy it. All the lusting they shared seemed forced while the end result of Trevor and Caitlyn’s felt more realistic.

One of my biggest problems was viewing Richard as a good parent. He’s been happy to allow his two kids live with their mother across the country. He’s had very little say in how they have been raised. Now he’s responsible for Trevor. Trevor’s issues aren’t his father’s slap dash fathering techniques nor having to move across the country to a brand new school for his senior year nor being away from his sister, whom he cares about. Trevor’s issues are all about his mom.

I felt the ex Mrs Ward was vilified to make Richard Ward look better. I.e., she had a revolving door of men where he was a careful bed partner. She liked expensive things and he was only an electrician, albeit one who had a good business and employed others. She was a good mother, her one good trait, and this allowed Richard to be completely hands off until this senior year which provides the conflict for the book.

Even though Caitlyn’s pregnancy dominates the majority of the storyline and we get scenes from both teens’ points of view, the repercussions of the teen pregnancy were downplayed and thus the possible trauma caused by such a seismic event had little power.  The primary focus was Molly’s reaction to the pregnancy and how that worked to push her together with Richard and pull them apart.  But the romance felt forced.  I never really got a sense of Molly and Richard as people, just as parents.  C