I have talked to you a bit on Twitter and wanted to read your debut, so when I saw it was available on Netgalley I snapped it up. Never Too Late is set in 1851 Victorian England, an increasingly popular time period, and it features one of my favorite pairings: older woman/younger man, where the woman is substantially older. 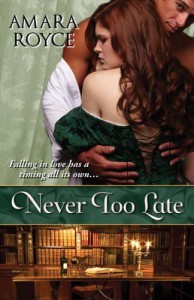 Honoria (Nora) Duchamp is a widow of many years who inherited her father’s bookstore and printing service. Married and widowed at a young age, she has devoted herself to her profession and her passion, which is printing radical and feminist pamphlets for activists who need to remain anonymous. While she is discreet, her work comes to the attention of an unscrupulous solicitor who also works for the Devin family. The solicitor blackmails Alexander, Viscount Devin using information about his younger brother, and demands as a price that the Viscount get to know Mrs. Duchamp, find compromising information about her, and provide that information to the solicitor so that he can shut down her printing operations.

The Viscount goes to Honoria’s bookstore expecting to find an old woman, and he is pleasantly surprised when he finds that although she’s definitely older than he is (by twelve years), she’s very attractive. He flirts with her but gets nowhere, so he convinces his mother to invite Honoria to one of her intellectual dinners. Honoria cannot resist the opportunity to meet luminaries like Tennyson and Robert Browning, and she is captivated by Lady Devin, who welcomes Honoria into her circle. When the bookstore is ransacked and the printing press smashed, a shaken Honoria accepts the help and shelter of Lord Devin and his mother, with predictable results. Despite her misgivings, Honoria at last capitulates to Devin’s overtures, but she is still wary of trusting him, and she cannot see a future for them.

I was taken with the setup of this book and the way the characters met and got to know each other. Although the precipitating event of the solicitor’s blackmail seemed a bit far-fetched, I went with it, and I appreciated that Honoria kept rejecting Alex, not just because of his age but because of the improbability of a future between them. In 1851 England, a forty-year-old childless widow was not exactly a socially acceptable wife for a Viscount.

“So,” she said softly, “what would you do . . . if you could do anything without reservation?”

He shook his head.

Seconds stretched out to minutes.

At first, he refused to consider the idea. But she simply watched him with those doe eyes, soft, sympathetic, somehow familiar. She watched him and she waited. And when he truly thought about what he wanted to do, what he would do if he had no responsibilities, no obstacles, no rules, only one answer came to him. It had nothing to do with exotic places or dazzling careers. It had nothing to do with Withersby and his clients or even with the Devin family. It had to do with this room and this moment and this luminous woman in front of him. He walked toward her slowly, tentatively, at first, but then more confidently as he found his voice.

“What would I do if nothing stood in my way?”

“What would I do if I had no one to answer to and nowhere to be?”

“Yes, in your wildest, freest dreams, what would you do?”

He was close now. One more step, and her skirt would brush his trousers. He could see smile lines on her cheeks, the promise of joy and approval. Her eyes, open and frank, narrowed slightly at his approach. Her lips, full and lush, seemed on the verge of spreading in glee.

He took one last step toward her and said, “Assuming there were no objection . . . what I would do, in my wildest dream, is kiss you.”

I enjoyed the way historical tidbits were woven into the fabric of the story. Robert and Elizabeth Barrett Browning settled in Italy after their marriage, but they did visit London in 1851 and it is entirely possible that Honoria could have met Robert Browning at a dinner. The Great Exhibition is depicted vividly and makes a clever setting for a critical plot point. The role that collodion-process photography plays in the plot seems a little unlikely given it had been so recently introduced, but that choice is in line with the time-compression we see in historical fiction, and the details are accurate and interesting.

As the book and the relationship progressed, however, I became frustrated with the direction both the plot and the relationship were taking. Honoria isn’t just accepted by Lady Devin, she’s invited to call her by her first name, put up in the Devin household after the bookstore break-in, and persuaded to join Lady Devin at their country estate to recuperate. Honoria repays this generosity by sleeping with Alex under Lady Devin’s roof. But all is well, because Lady Devin apparently doesn’t mind. This was stretching credulity a bit too far. The reason offered is that as a loving mother, Lady Devin just wants her son to find someone to be happy with, but we’re not given much background on why Alex would have been so resistant to falling in love before he met Honoria. Yes, he has Daddy issues, but I couldn’t connect them directly to a fear of love and/or marriage, since he clearly wasn’t following in his father’s footsteps.

In addition, there are some small mistakes and hiccups. Honoria is described as part of the nobility, which she clearly is not, and there are some errors of address. At one point Honoria thinks of herself as alone and friendless, but we’ve already met women who seem to feel quite attached to her and she appears to have a small but strong circle of friends and acquaintances. This contradiction is somewhat resolved late in the book, but it didn’t make sense to me as I was reading.

The blackmail plot implicates people close to both Alex and to Honoria, and the two strands come together in the resolution of the mystery. The blackmail and exploitation plot threads were not as well developed and nuanced as I would have liked, but that wasn’t my biggest problem. I’m putting this in a spoiler because it is a major twist in the story.

[spoiler]Honoria has one of my least favorite character traits: she is a Virgin Widow. But it’s even worse than that: she’s not really a widow, because she fraudulently represented herself as married and then immediately widowed in order to qualify for an inheritance from her uncle. In other words, she obtained the bequest, which allowed her to keep the bookstore to which she and her father had been devoted, through illegal means. We are supposed to sympathize with her because her uncle is unsympathetic and she is sweet and deserving, but I’m not crazy about a lying heroine, especially when it’s not well motivated or justified.

When Honoria confesses the reason for her unexpected virgin status after she and Alex have had their first instance of lovemaking, he becomes deeply upset because he feels he is “responsible for her traumatic loss of innocence.” At this point my eyes rolled back in my head for good. Honoria is considered by all to be a widow, so she’s not expected to be “innocent.” If the reason for her virginity is discovered her shenanigans will be revealed, presumably to her social and possibly legal detriment. So Alex has actually done her a favor by helping her get rid of her virginity, not “taken” something from her.[/spoiler]

Of course Honoria pushes Alex away because she’s too old and not high-born enough for him, but he persists, and together with the combined efforts of Lady Devin and another character who has experience being the older wife, they are able to overcome Honoria’s fears and scruples and Alex and Honoria achieve their HEA. Alex’s brother’s name is cleared and presumably he will feature in an upcoming story of his own.

In the end, this was a mixed bag for me. I liked the first half of the romance and I liked the way Alex and Honoria interacted. I liked the meshing together of the historical and fictional components, and the writing is smooth. But the plot twists and the out-of-period class relations kept me from immersing myself in the story. Grade: C