I really loved this cover and I really loved the idea of reading about a female high ranking Naval officer. Lt. Commander Roanna Brandywine is in Naval Intelligence and stationed at Whidbey Island. She’s a year off a broken engagement and still tender from from finding out her fiance married her half sister and no one in her family told her about it. Instead, she went to dinner with her fiance whereupon her broke up with her, in public, and confessed to marrying her sister. 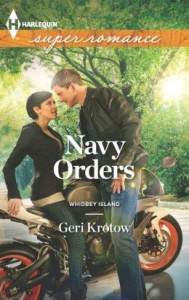 It wasn’t just her ex-fiance’s betrayal that hung over Ro, but her family’s breach of trust that rocked Ro. She climbs onto the bridge at Deception’s Pass and throws off the wedding ring. Chief Warrant Officer Miles Mikowski sees her and is afraid she is about to commit suicide. “He couldn’t bear the loss of another warrior-in-arms to the war. No matter if the cause was a bomb, rocket-propelled grenade, bullet or PTSD.”

The two are paired together when their commander assigns them to look into the supposed suicide of Petty Officer Perez. There are a lot of explanations as to why they are doing this and not NCIS or leaving it to the local police, but I’m just accepting it for the sake of the story even though it seems weird and not at all believable to me.

The problems with the story have less to do with the plot and more to do with the long pages of introspection and inner monologue. I didn’t get any frisson of excitement when Miles and Ro meet up again and despite the fact that Miles has always kind of had a thing for Ro, there was no real angst.

Worse, I felt that even though Ro was a high ranking commander, she was always being shown up by Miles. I didn’t know if this was an attempt to make him seem more her equal (I assumed that she was slightly above him although I could be totally wrong about that). In the first investigative scene, Ro can’t concentrate because the site of the dead body is stomach churning. Miles, having served in combat, is unmoved. Ro is affronted when the local detective suggest that they information share. Miles mildly suggests that it’s good for both of them and that they can do that without violating Navy protocol.

Ro came off, often, as a newbie instead of a seasoned veteran who had accepted so many tours that her fiance left her for it. She also plays the stereotypical uptight, by the book female. Krissy, the sister, is almost a caricature who is so selfish that she seeks succor from Ro during a fight with the ex-fiance turned husband.  Dick, the ex-fiance turned husband and surgeon, is also a weird mix calling everyone dude and girl and apparently can’t afford to take Krissy and stay in a hotel room instead deciding that they must crash at Ro’s house.

I also wasn’t sure what to make about Ro’s repeated suggestions that Mike couldn’t do things due to his prosthetic such as ride a motorcycle or evince surprise that he’d been able to climb a tree “with one leg.”

The more interesting couple were Karen and the Commodore.  Karen spent her whole life being the perfect Navy wife and everyone resents her from the Commodore to the other base wives to Ro herself.  Ro even said that Karen’s attempt to tie herself to her husband’s career path made Ro “sick.” I actually sympathized a lot with Karen, although I wasn’t sure I was supposed to.  My own bias is probably showing here, but I’ve often thought that following a spouse from base to base all over the world is extraordinarily difficult.  But perhaps Karen was a certain type on a military base that all the other military folks would immediately identify and hate.  From an outsider’s point of view, I just felt bad for her and as her secrets are uncovered throughout the story, I felt even worse.

There were a number of decent suspects and from a mystery standpoint that was fairly well done. The story is steeped in military jargon as it involves almost solely military personnel whether it is actual service members or people married or related to sailors.  But the romance felt forced and the sexual tension that was written on the page never came alive for me. C