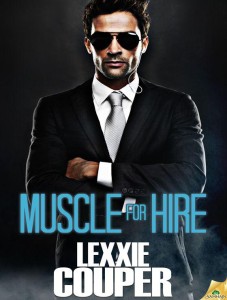 I loved the cover on this book. It depicts exactly the image I have a rock star’s bodyguard. I couldn’t resist requesting it from Samhain when the review copy list was sent. This is a sequel to Love’s Rhythm which I reviewed last summer.

While I enjoyed Muscle for Hire more than the previous book, I still felt like the sex scenes were given more attention at the expense of developing the romance, particularly as the romance takes place over only a few days.

Ex-SAS commando Aslin Rhodes used to be the primary bodyguard and head of security for rock legend Nick Blackthorne but Nick heads into semi retirement as a result of hooking up with an old flame.  While debating his future, Rhodes agrees to serve as a consultant on a high budget action film starring Chris Huntley.  Chris is watched over by his sister and martial arts expert Rowan Hemsworth.

The meet cute between Rowan and Aslin involves Rowan putting Aslin to the ground and driving her heel into his chest. It was a misunderstanding. Aslin took Rowan to be an overeager fan.  Rowan’s first response to any unwanted physical touching is to fight back, an instinct that she fostered after the violent deaths of their parents during a home invasion and her position as Chris’ mother figure.

While this is an erotic romance, the sex scenes didn’t seem to materially affect the story. In fact, I felt that they could have been excised and the tone and romance would have been the same. I prefer when the sex scenes are so baked into the storyline that I have to read every word for fear I’ll miss something important. Plus, a few of the sex scenes occurred at improbable times lending a farcical feel to a more serious, emotionally laden story.  At one point, Rowan has two broken ribs, possibly a concussion but sallies forth from her hospital bed to mount Aslin.  She literally cannot wait one more day to heal up before she gets another orgasm.

Rowan has worked hard to make sure that Chris stays grounded and she’s run off members of Chris’ entourage that she deems unsafe or unwise.  But for all of her carefulness in Chris’ life, she doesn’t extend that clear thinking to her own.  In scene after scene, Rowan often acts foolishly and irrationally and at times the circumstances excuse it but at other times, it can be rather frustrating.

The story is over the top in every sense, from the danger the characters are placed in to the amount of time that it takes the two main characters to fall in love to the numerosity of the sex scenes.  Perhaps if this was a live action movie it would work better (although there would be no time for all the love scenes in a three hour movie) but in the book it was hard for me to take all those implausible leaps of fate. C