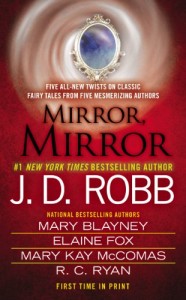 Billed as an anthology of fairytale inspired romances, the majority of these stories turned out to be rather sweet. Although J.D. Robb’s Eve and Roarke story is fabulously dark, one should not assume the rest of the stories are going to be anything like that. I feel like that story would have fit better in an anthology that included Jeff Lindsey and Greg Iles (if those authors ever decided to do romance).

I would recommend this anthology to people who tend to like their romances on the sweeter side and tell them to skip the first story. If you’re buying this for Eve & Roarke, then just skip the rest of the book.

C for the anthology overall (Individual grades for each story are given below).

So what originally drew me was the promise of another Eve Dallas story. (For those unfamiliar with J.D. Robb’s “In Death” series, Eve Dallas and Roarke are the protagonists of an awesome futuristic police procedural series). However when I saw that this story revolved around kidnapping children, I kind of balked. In this story, Eve tracks down a cannibalistic twin who kidnaps her sister’s twin children. For some reason, I haven’t been quite able to stomach stories about children being hurt since I had my baby. But skimming the first few pages just sucked me in. And this was just a perfect short story, full of all the tension and suspense you would expect from a J.D. Robb short story. She truly knows how to write frightening villains and I could not put this down. However, unlike the longer length novels, there wasn’t much conflict between Eve and Roarke. Instead you just got to see how awesome Eve is at her job and just how perfectly Roarke is as a supporting partner. By far this is the best story in the anthology and I would say that this story makes the anthology an auto-buy for die-hard Eve and Roarke fans, even if the other stories are kind of meh.
A+

—–
If Wishes were Horses by Mary Blayney

This was real tone shift from the J.D. Robb story but definitely the next strongest story in the book. Set in 1816 England, housemaid Martha Stepp has a magical coin that seemingly grants wishes for everyone who holds it except for her. But when she wishes for “finding a man who would take her away from the servant’s life and share his bed and his world with her forever,” the coin slowly begins to grant her wish in a rather unexpected manner.

After being wounded at Quatre Bras, just before Waterloo, Sergeant James Tresbere accompanies his commanding officer and friend, the countess’s son as he returns home. Treated as an “upper servant” since James is filling in as his friend’s valet, in truth he occupies a space that is neither upstairs nor quite downstairs since he saved James’s life.

It’s a rather old fashioned sweet romance in that there are a few discussions between the two, but no physical contact When Martha is found asleep in James’s bed (fully clothed since she has a secret habit of sleeping in random unoccupied beds in the mansion), she is fired. James sets out in search of her and finds her asleep in a room at an inn. Thankfully he does not get in bed with her (because I totally hate that trope of a woman finding an unexpected man in her bed), but politely sits in the chair next to her, waiting for her to wake up. They talk, and discover that although they have feelings for one another (“I love you Jack but I do not know you as well as I would like”) they realize that they will have to take some time to get to know each other, though both are positive that they have found true love in the other. It’s a rather fairy tale romance, in that love seems to just strike like magic, rather than having a growing a relationship in the modern sense. Still considering that this is 1816, and relations between the sexes were much less casual, I suppose it worked.
B+

This was a quirky modern day take on the sleeping beauty story with a gender reversal that didn’t quite work for me, but that may be because of my own flaws as a reader. First, I’m not a fan of ghost romances. Secondly, I illogically kept picturing Michael Jackson in this story because this hero shares the same name as his kid: Michael Prince.

Cursed at birth by a fairy, Michael is a young man in the 1970s who is achieving some small success as a local news anchor. However, forgetting the curse, he cheats on a girlfriend named Deirdre Spindle. She curses him (apparently the birth curse is kind of a prophetic curse) and he disappears without a body and becomes a ghost haunting the house he lives in until the present day. When Cassandra Carlisle wins the lottery, she uses the proceeds to start a new life away from her soon to be ex-boyfriend and buys Michael’s old house. She’s the only one who can see him, and over time gradually falls for him. There are hints of them being lovers in another time, but to a reader’s disappointment, none of that is ever made quite clear.

What was neat about this story was that as a ghost, Michael had access to multiple planes of existence, including time, and we saw him relive the bitterness and sadness of his death and being unable to contact his grieving family. It was perhaps, maybe too well done , because it made the ending seem saccharinely sweet.

Michael recovers his body and a life with his friends and family as if he never left. This didn’t seem quite logical too me as I guess the curse must have erased the last 30-40 years of his family and friends’ life for that to happen, but oh well.

I’m really not the audience for this type of story: a supersweet Christmas story with the perfectly selfless heroine and a climax that feels quite deus ex machine.

Natalie, angel of a heroine is always behind on rent, because she spends her money and time helping the homeless. As the bills pile up, Natalie takes on double shifts at the hospital where she works as a lab tech and also picks up extra shifts as an off the books motel maid, while volunteering at her church and opening her apartment to an immigrant family from Mexico.

Miles is a cop who has taken upon himself to look after her. 10 years older than Natalie, he envisions himself to be too old for her until he’s pushed by a friend. There’s a bit traditional male posturing here, with some talk about ‘protecting one’s woman.’ When Natalie is carjacked in the midst of a snowstorm, her attempts to build a fire leave her out in the cold where she sees the beauty of a Christmas comet. Falling asleep, Miles rescues her and there is of course a rather abrupt overly sweet happy ending.

Since this is based on a fairytale, a windfall of money also drops into her lap. The Mexican family that Natalie takes in turns out to be a wealthy family hiding from Mexican cartels because they witnessed a murder. When Natalie asks why they chose to hide with her in such humble circumstances, the response is that her reputation let them know they would be safe. I didn’t quite buy this. I couldn’t imagine some wealthy family in America allowing their family to stay in such humbled circumstances.

I almost felt like this story didn’t belong in the anthology, but then the author’s note said it was based on Hans Christian Andersen’s “Little Matchstick Girl,” which made more sense. Still, I was kind of bored by a story with a heroine that was so perfect.

—–
Stroke of Midnight by R.C. Ryan

This Cinderella based story isn’t bad. The stepmother is truly vile and a nasty piece of work. Sydney is a bit of a gentle pushover (are all fairytale heroines such selfless innocent pushovers) who has finally found peace as an art teacher at a local community center. When her stepmother dumps off a bunch of her father’s junk at her house, Sydney discovers $5000 hidden in her father’s old shirt and a letter telling her of his hopes for her to travel to his ancestral home of Innismere, Ireland.

Taking a risk, she does just that, and meets a handsome lad named Cullen, who coincidentally is also from Innismere. A whirlwind friendship turns into an affair as he takes her physically to “a place where only lovers go,” which is about as much as you get from a sex scene. Despite accepting Cullen’s proposal, Sydney is scared off by Margot’s warning of a marriage scam designed to trap rich tourists. Of course she runs off, Cullen catches her, and Sydney finds out that Cullen is the farthest thing from being poor one could get.

I found this to be rather predictable, and overly sweet for my taste. Although there is a bit more relationship development in this story than other ones, there was something about this that felt very old fashioned, perhaps the way the single love scene was blacked out.

→ Amy
Previous article: REVIEW: A Tryst With Trouble by Alyssa Everett
Next Post: REVIEW: The Bridge by Rebecca Rogers Maher