In your first book, Claiming the Courtesan, I really liked the mix of angsty melodrama with a fresh review of some well-worn genre stereotypes. That mix of old and new kept me reading your books, but with this new one, Midnight’s Wild Passion, it seems the novelty has worn off. I’m not sure whether that’s because I’ve become more accustomed to your voice and your style, or because this new book just doesn’t have the same freshness of some of your previous releases, but either way, Midnight’s Wild Passion was just not wild or passionate enough for me. 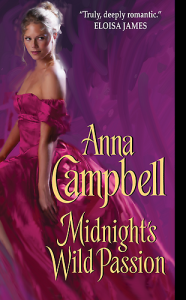 Lady Antonia Hilliard has lived for ten years as Antonia Smith, chaperone to the lovely Cassandra Demarest, who is currently enjoying her first season in London.  Her disguise gives her the appearance of unattractive invisibility and her prickly demeanor keeps anyone who might otherwise be curious away – she is known as “the dragon of chaperones.” Well, anyone but Nicholas Challoner, the reprobate Marquess of Ranelaw, who seeks out the lovely Cassandra as part of a family revenge plot, but quickly perceives that the bigger prize might be the deceptively plain chaperone. Who is this imperious young woman and why does she feel the need to hide behind obscuring spectacles and an ugly cap? And why does every encounter he has with her feel like a promise of something challenging and lusty?

It’s not until Nicholas breaks into Antonia’s room that either of them begin to understand the depth of their mutual attraction, which Nicholas is more than happy to encourage but which Antonia will do almost anything to stem – including taking a fireplace poker to Nicholas’s face and head. Antonia, you see, is in her current fix because she let her passions run wild a decade ago, with a young friend of her brother’s who promised to marry her but merely ruined her and left her, penniless and disgraced, in Italy. When Antonia’s father refuses to have her back, she is forced to fend for herself, and has spent the past ten years grateful that her cousin, Godfrey Demarest, recognized her on the way back to England and took pity on her, offering her a place in his home. The same Godfrey Demarest who was, in his own youth, responsible for ruining Nicholas’s own sister, and on whom Nicholas now seeks revenge.

Writing this all out makes me realize how much I like this set-up. First there is the link between Antonia as the young woman who was ruined and Nicholas as the once-helpless brother who had to watch the same happen to his sister. Adding in the fact that Nicholas represents exactly the kind of man who ruined both Antonia and his sister generates just enough irony to promise some great angst and drama.

If this were an older book, Nicholas would likely remain a diamond-hard rake until the last paragraph; however, the road Campbell chooses here is both more interesting and more difficult. She starts to transform Nicholas somewhat early in the novel, which nicely advances the romantic connection between him and Antonia but undermines the dramatic tension around the revenge plot:

“Antonia, stop it.” He abhorred her desolation and the corroding shame beneath it. With sudden violence, he ripped off her spectacles and flung them onto the desk. “I don’t care that you’ve had a lover.”

“If that’s true, you’re the only person in Creation who doesn’t,” she said bitterly. Her eyes were glazed with betrayal and misery…

He grabbed her shoulders and fought the urge to shake some spirit back into her. Dear God, why couldn’t she be angry? He couldn’t endure this biting sorrow. …

“What does it matter? You know the most important fact. That I’m a whore.”

“Antonia, my darling,” he groaned, and dragged her against him, lifting one hand to press her head into his shoulder. His gut coiled with crippling grief. Her suffering shredded him to ribbons, The protectiveness he’d always refused to acknowledge surged like a boiling wave. He’d rather cut off his own arm than hear her denigrate herself. “Don’t do this.”

Anyone who has read an Anna Campbell book will recognize the dynamic here: the heroine is a “fallen” woman who is ashamed of her sexual passion, and the hero is put in a position where he is trying to free her to enjoy her sexuality (with him, of course). In terms of the book’s plot and character development, it creates a dilemma, because as long as Nicholas remains a cruel rake, the more dramatic tension the reader experiences as he pursues his revenge and threatens to ruin – again – Antonia. But keeping him on that road also makes it difficult to sustain sympathy for him or to forge and trust on the part of the reader that Nicholas and Antonia make a suitable romantic couple. And yet, in bringing him down the path of softening and of bringing him to a recognition of his own emotional needs, it also undermines a lot of the built-in revenge plot tensions.

Without spoiling some of the ways in which Campbell attempts to re-infuse that tension into the book (and there are several that prevent interesting possibilities and challenge the pattern I expected as I was reading), I will say that even as I admired the introduction of an interesting twist, increasingly I felt like these twists were being thrown into the path of the speeding plot, diverting my attention for a time but ultimately leading me back to the same question of how the promised conflict was going to be sustained or replaced in a way that keeps me glued to the book, waiting for the impossibly possible resolution. The last twist felt particularly out of left field, and I am still not completely certain why it was included outside of its ability to effect a final resolution of the love match. Also, I’m still not certain why Antonia must maintain her disguise for a decade, especially since very few people knew who she was before her scandal (her family is from a remote part of Northumberland), and much of the plot relies on that presumption. And strangely, when I look back on the book it seems like not a great deal actually happened, despite (or perhaps because of?) the many paragraphs were devoted to the mental lusting, the mental shaming, the mental blaming, and the mental misgivings and fears of what could happen.

Part of the issue for me was that I never felt that Antonia and Nicholas transcended stereotypical characterization. Antonia was the strong woman who had been brought low by circumstances and shackled to an unjust shame from which the hero’s love and desire must release her. Nicholas was the passionate rake with a sad, dark story who is shackled to an unjust sense of worthlessness from which the heroine’s love and desire must release him. And while Nicholas actually seems to precipitate much of his own character growth (a welcome change), the fact that much of Antonia’s shame is discharged through Nicholas’s urging was troubling to me. On the one hand I’ve enjoyed this theme in other Campbell books because it seems to cut against the whole virtue = virginity equation you still see in more than a few Romances, but on the other hand I find it problematic that the heroine does not really make this transformation through her own agency. And because I never felt that the novel challenged me to see more in these characters, I felt the subversive potential was ultimately eclipsed by genre stereotyping.

I do find some of Campbell’s word choice and sentence structure fascinating, largely because I’m often goaded into wondering whether certain phrases are needlessly complicated or even sound. For example, while I liked this phrase very much – “[h]e carried mayhem in his soul” – this one – “[f]oreboding oozed an icy path down her backbone” – presented me with a conflict between frozen ice and oozing liquid. And I experienced that back and forth throughout the novel, which further distracted me from the substance of the story and the characterizations instead of plunging me recklessly into the passion and the wildness.

While I did not think Midnight’s Wild Passion was a bad book, for me it just did not shine. C