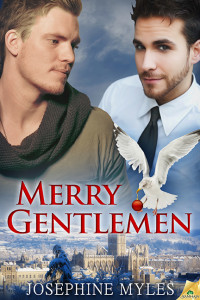 ’Tis the season of goodwill to all men…even the one who dumped you.

Riley MacDermott’s ambitions are simple. Managing the annual Bath Christmas Market—which involves long hours in the cold and a whole lot of hassle—will secure the promotion he needs to afford to move out of his noisy, top-floor flat. Where not even his balcony is safe from an aggressive herring gull.

The last stallholder he expects to see is his ex. Riley never recovered from their break up, and five years on the old chemistry still sparkles. So does their habitual head butting.

Stan never wanted to leave the love of his life, but the pull of the woods was too strong—and Riley was firmly planted in the city. Reconnecting is painful, but Stan still jumps at the chance to stay with his old flame during the Market. And damn the consequences.

As the weeks pass, the two grow closer than ever. But despite scorching sex and cozy intimacy, they both know they face a cold and lonely future. Unless one of them can compromise.
Warning: Contains sex in a shed, a seagull with a grudge, glamping, awful Secret Santa underwear, misuse of an Abba song, and as many wood-related puns as the author thought she could get away with.

As blurb indicates, Riley and Stan meet each other again at the market. Stan left Riley five years ago. Basically Stan likes to live closer to nature and Riley needs crowds, civilization, needs to be among people in order to thrive. But Riley clearly was not able to forget Stan and when he’s drunk, he constantly talks about him to his best friend, he keeps the pictures, etc. In other words Riley is not over his ex. It is also apparent that Stan is not over Riley – very soon after they meet again they have a passionate sexual encounter.
And while they stay together while the market is taking place, but they know that it is going to be over soon unless they can compromise.

I liked Riley – I liked his ambition and his drive, and I adored his fights with the seagull (you’ll have to read the book to understand what I mean). Later in the story I decided that his fights with the seagull, while very funny were supposed to be a metaphor for nature winning over civilization, and that annoyed me in light of other issues I had. I felt bad for him not being able to forget his ex, but at the same time I was wishing that he would get his groove back and moved on.

And although I have to say that while I rolled my eyes a little over both men staying away from each other for five years with neither of them taking the first step (it was just such a tiresome m/m cliché for me), I liked that believable reasons were given for them to stay away from each other. I am not sure if I buy it completely, because Stan could have come to the market a year after he left, or even a few months after he left instead of waiting until five years had passed and all the same events could have taken place. But at least credible reasons were given for the separation and at least they were apart for five years and not fifteen. I read a story a while ago where the guys were apart for fifteen years and of course they were only thinking about each other, but meeting again was out of the question for some weird reasons.

So, I appreciated that in this case the narrative gave me some help to suspend my disbelief. I also liked that while Riley could not forget his ex, he tried to form other relationships and was not sitting around crying and falling apart. Riley concentrated on his professional career after he and Stan split up and when the story begins as blurb states he is managing the market in hopes of obtaining a promotion.

After a somewhat terse meeting sparks fly between Stan and Riley, but nothing has really changed – Riley is a people person who needs crowds and civilization, and Stan needs wilderness to carve things from the trees. Well, Stan really lives two hours away from where Riley lives (yes, two hours, five years apart) and they have cinema and Internet as he says at some point, but there certainly does not seem to be many people in the town where he lives and it is much closer to nature.

I thought the reason for their breakup and the main conflict between them was very natural, very well done – I mean how often do we see this in life, when two people love each other a lot, but want different things from life. Sometimes they compromise in order to be together and sometimes love is just not enough.

I cannot say that I liked Stan much – not because he was some horrible person and not because he left Riley (surely it was better than the alternative at that point). [spoiler] No, I really disliked that he rejected even a possibility that in order to stay with Riley he would need to compromise as well. Riley wanted them to try visiting each other, perhaps make an attempt at some sort of long distance relationship, but Stan decided that it would be too painful for him. I hated that Riley ended up sacrificing it all in order to be with Stan and Stan just took it without giving anything back. I admired Riley’s creativity and his ability to find ways to attract people to them in their new life together, but that was all Riley’s doing without help from Stan. Riley spent time thinking about how to make their relationship work. What did Stan do? He did not even apologize properly for his role in the breakup after Riley apologized. Because saying “if that’s what you need to hear I am sorry” is not a proper apology in my book. There is a conversation near the end of the story in which they agreed that they would take holidays together and go to civilization, but for me it was just not enough: when they tried taking nature holidays back when they were together Stan was not happy, but he expects that it will be enough for Riley this time. I also have to admit that I really disliked the message that what Riley did and have was not important just because Stan was living closer to nature. I like nature and love holidays like that, but being a child of big city I would not want to give up civilization for more than a month or two. So I guess I felt like my feathers were ruffled a little bit too ?. [/spoiler]

This story has a very small cast of characters, so besides Riley and Stan the only two secondary characters which were relatively well developed were Riley’s best friend Janine and his boss Rita. But I really cannot even say much about them – they were mostly serving the story. I wish Janine especially would have more agency – while she is portrayed as a competent worker, I still felt that she was mostly there cheerleading for Riley.