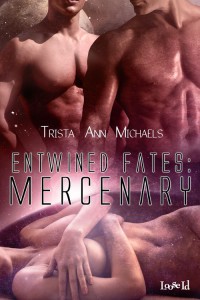 I think I bought this book because I wanted to read a science fiction space opera fantasy romance thingy or I may have bought it because someone recommended you, as an author, to me. One of the two. I’m thinking it was the latter because as I re-read the blurb at Fictionwise, it didn’t really match how I perceived the book.

Kiley, the daughter of King of Shaba of Delnista, is a very spoiled and headstrong young princess who manages to get herself captured and her chaperone killed by a sex slave trader. Kiley is about to be auctioned off when Lucien, Captain Amanpour, is requested to go and save her as a favor to Kiley’s father. Kiley’s planet is a peaceful one and doesn’t have a military force that could be deployed to save her and Delnista is forced to seek the services of a mercenary. Lucien pretends to buy Kiley but her attitude fires Lucien’s desire. He likes a little resistance to overcome and Kiley looks like an enjoyable battle.

Initially, Kiley bothered me because she showed little remorse for her actions nor did she show much of a significant emotional injury from having her chaperone killed because of Kiley’s own reckless behavior or for what she believes is her sale into sexual slavery. Instead, Kiley is turned on, albeit against her better judgment by this man who treats her as if she exists to pleasure him in all the ways he orders her to.

Lucien is excited by her anger, her resistance and intentionally acts in a manner designed to be provocative and to generate the kind of response he wants from Kiley such as her incensed responsed when he left her a slave collar to wear. Lucien’s enjoyment is heightened by sharing Kiley with his first mate, Syeer. They three of them enjoy a number of dom/sub games on the way to delivering Kiley to Delnista.

The emotional conflict arises because Kiley is a princess and Lucien isn’t currently of a status to marry her. There is an assumption that takes place, without exploration, that Kiley can only marry a royal. This allows Lucien’s abdication of his right to his own throne to be a powerful impediment to Kiley and Lucien being together.

As for the space aspects, so much of the time is spent in the bedroom, that we don’t really get a good sense of the worldbuilding. It wasn’t wallpaper exactly, but it wasn’t a fully integrated space fantasy either.

Kiley did appear to grow over the course of the book, accepting that her actions had consequences which imperiled her planet. She learned what her sexual preferences where and how to exert her power as a submissive over Lucien. Lucien had a sardonic mien which made his dominance less overbearing than the ordinary alpha male. His dom position was less of a necessity and more a role that he enjoyed playing and one that fired him up. The sexual parts of the book was good and the plot, while a bit thin, was serviceable. Overall, it was an enjoyable romp but one that didn’t have much of an emotional impact. C

This book can be purchased in ebook form from Fictionwise.