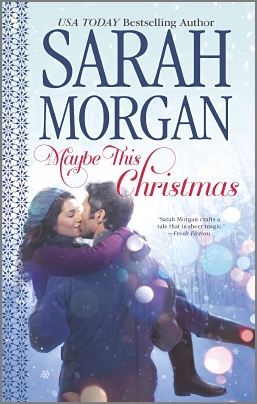 This winter, ex-skiing champion, reformed heartbreaker and single dad Tyler O’Neil has only one mission—making sure his daughter, Jess, has the best Christmas ever. The fact that his best friend, Brenna, is also temporarily moving into his chalet at the overbooked Snow Crystal resort is a delicious distraction he’s simply going to have to ignore. Theirs is the one relationship he’s never ruined, and he’s not about to start now.

Ski pro Brenna Daniels knows all about the perils of unrequited love—she’s been in love with Tyler for years. But living with him is absolute torture… How can she concentrate on being his friend when he’s sleeping in the room next door? Then when Tyler kisses Brenna, suddenly the relationship she’s always dreamed of feels so close she could almost touch it. Could this be the Christmas her dreams of a happy-ever-after finally come true?

I liked the excerpt for this book and since Sunita is such a fan and I trust her contemporary Harlequin recs, I thought now was the time to give one of your stories a try.

This is definitely an ensemble piece with fully the first 1/4 of the book devoted to catching readers up with all the events of not only Tyler and Brenna’s pasts – together and separately – but also the O’Neil family and the business. A little of this so I have my footing is great but more than once I found myself thinking, “Hurry up and get with this story!”

Tyler and Brenna know each other well. They’ve grown up together, sneaked out and skied together, skipped school and skied together and now work together. Tyler knows when a request or situation could be upsetting to Brenna and Brenna sympathizes with Tyler trying to get the hang of being a father. Of course they’re remarkably obtuse about how the other feels about them. But this is a romance of friends-to-lovers so that is par for the course. Luckily they have past heroines Elise and Kayla plus Jess to shamelessly maneuver and manipulate events.

Thank God that almost everyone involved in this realizes that the manipulation is actually going on and mentions it and talks about it and says negative things about it. I like books much better in which the characters show a modicum of awareness and common sense. Yet, still more reprising of “we know this already” information occurs. Seriously in case we forgot that Brenna’s parents are useless, Tyler is hot with tons of women hurling themselves at him and Jess is getting bullied at school – here’s a recap or three.

I did find my interest finally being caught as Tyler and Brenna’s relationship takes more center stage amidst all the other O’Neil Family Christmas Letter info. Tyler is predictably jealous of Brenna’s “date” while Jess is worried about it. I would love to see something happen for Josh, though, as he deserves something for being such an understanding guy.

So many romances include children as mere props. Thankfully this is not one of those books. Instead Jess and her relationship with her father is a major part of the story. I was laughing from the first as Tyler negotiates the dangerous shoals of a thirteen year old daughter who is as headstrong and determined as he. When he has to suck up his embarrassment and go buy her “girl stuff” it took me back to a roommate of mine who told me about how her father went from red faced horror at the thought of buying what she needed to a casual confidence by the time her younger sister needed such things. Tyler might not always get it right but he tries and it’s obvious he loves his daughter.

Brenna is the romance heroine “who has wanted the hero for years” but at least she did try to have other relationships and isn’t a virgin on a shelf. I cringed for her and wanted to bash Tyler when he has second thoughts about a sexual relationship – too late buddy! – and winced when her friend’s helpful lingerie gift seemed destined to go wrong and cause Brenna to pratfall but darned if Brenna doesn’t decide to go for it and it works out. This also lead some some funny dialog from Tyler about how he’s reacting to the sight.

“I may never wake up.” His eyes were closed. “I think you may have killed me, but I don’t want you to feel guilty about that. Just tell me one thing—where the hell did you buy that black, silky man trap?”
She smiled and pressed her mouth to his shoulder. “You didn’t like it?”
“I was going to ask if it came in other colors.” With a groan he dragged her hard against his body, and she curled around him.

There is a lot of funny, wry dialog in the book that made me smile and laugh. Tyler’s interactions with his brother are well done. I did get annoyed with all the references to the characters of the past books but then I’ve mentioned that already.

There’s one last bombshell that gets dropped and Tyler’s general response to it annoyed me. At first he seemed like he was going to blame Brenna but after Brenna yanked a knot in him backed off some. This whole situation seemed designed to cause the last plot conflict needed for the page count as everyone in the book, and myself, were like “Really? Really??”

I was waiting for some great scene of Tyler spilling his thoughts to Brenna about his accident and the loss of his ski career but that was a zip-and-it’s-over “trust me this conversation happened” scene. The resolution of Brenna’s relationship with her mother is too fast after a lifetime of pain. The reasons for the estrangement are sound but it’s too neat.

One good thing about the showdown is how Brenna is motivated to discover that she does have it in her to face confrontation and win. Tyler advances in Commitment 101 too after being stuck in “I don’t ever want a long term relationship because of what that bitch did” for years. Yay for Brenna standing up for herself in the relationship and asking the question she needs to know an answer to. Wow, she gets all assertive at the end!

Tyler’s big announcement does make up for a lot of his nonsense. It’s loud, it’s proud and it’s public – well Jess is there which says to me that Tyler is truly serious about what he’s saying and has finally admitted it to himself. And man, when he decides to go for it, he goes BIG. This is like being in the gate at the Hahnenkamm facing its killer downhill and letting it all hang out at 90mph. I felt as if I should be standing on the sidelines madly ringing a cowbell for him.

Watching Brenna and Tyler finally get on the same page at the same time was great but too much of this finale to the O’Neil brothers’ trilogy was recapping. Lots and lots of it. Way too much of it. The shameless shenanigans used to get Brenna and Tyler together was too much romance novel-ish as well. I didn’t like the last minute conflict twist but I did laugh at a lot of the dialog. Tyler makes up for being an idiot at the end but it’s not enough to balance the other things for me. C