I got drawn into your Alpha and Omega series after reading the first story, a short story by the same name, in the anthology On the Prowl. I actually read the story at the urging of Janine; on my own I would likely not have picked up a werewolf romance. But Janine raved about Charles and Anna (especially Anna), the unusual hero/heroine pair featured in the story and the two subsequent books. She was right. These stories were…different, not my usual thing, but I did end up liking them quite a lot. (I should mention that I had previously read the first Mercy Thompson book and while I hadn’t disliked it, it hadn’t done much for me, really.) 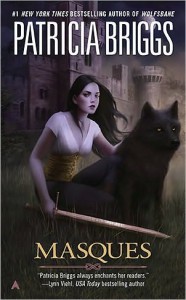 ow we come to Masques. When I read that Masques was a reworked reissue of your first novel, it made a lot of sense. The book reads a lot like a first book; promising but flawed (even after the reworking).

In the prologue, a wolf who is obviously more than a wolf (since his thoughts are of a human) is on the run, sick, afraid and hunted by creatures using unspecified magic to locate him. He stumbles into a pit trap and breaks his leg; later he is found by Aralorn, a young female mercenary who sets out to rescue him. The wolf allows her to, in spite of the fact that he had resigned himself to death in the pit, and may even welcome it. But Aralorn, who carries the whiff of green magic, intrigues him.

The story picks up four years later, in the castle of the ae’Magi (who is either a very powerful wizard or sort of king of the wizards – he’s referred to at times as the Archmage, which makes me think the latter might be true, but it was never entirely clear). Aralorn has traded her career as a mercenary for one as a spy, and she has infiltrated the castle on a reconnaissance assignment; there has apparently been some unspecified threat against the ae’Magi. Aralorn had thought to come in as a servant but at the last moment decided to instead pose as the slave girl that the ae’Magi has just bought (her magic allows her to alter her appearance). This has gotten her into a bit of a pickle, as the ae’Magi has chosen to place her in a cage in the middle of a ball he’s holding; he’s placed another glamor on her so that she appears to the guests as a snowfalcon.

Aralorn has already discovered what few know – the ae’Magi is a monster. She has seen him kill children as part of his power-gathering rituals, and unlike the vast majority of people the ae’Magi comes into contact with, Aralorn is immune to whatever supernatural charm he uses to convince people he’s a swell guy. The ae’Magi reminded me a bit of Jasmine from the fourth (I think it was the fourth) season of Angel – a monster who bespells almost everyone into believing they are beautiful and good. This sets up an interesting conflict (in both Masques and Angel) where a small band of people who recognize the monster’s true nature have to fight to free everyone else from the monster’s influence. I really liked this aspect of the story and thought it was well-done.

Aralorn, facing the threat of rape from the ae’Magi, is able to escape later that night, but not before an encounter with Myr, recently crowned King of the Reth, who appears to be one of those immune to the ae’Magi’s magic (and thus recognizes Aralorn as human in her cage). The previous king and queen of Reth have recently died in a tragic accident, one that Aralorn suspects the ae’Magi engineered.

Outside the castle Aralorn promptly runs into her old friend and sometime companion, Wolf, who chastises her for what he considers a suicide mission (yes, Wolf can speak). Despite the passage of time, Aralorn has not learned much about Wolf – he keeps his secrets close. But she’s aware that Wolf is another who is not fooled by the ae’Magi’s facade.

Before long, the two are parted as Wolf creates a diversion so Aralorn can escape from the Uriah, a zombie-like race that rambles the forests and seems to have become more prevalent and aggressive lately.

Aralorn’s attempts to get to the bottom of just what the ae’Magi is doing to control the populace eventually lands her in even more trouble, and she ends up in a far north camp where Myr, Wolf and a ragtag band of followers have fled. All are immune to the ae’Magi and are sought by him.

The story is pretty straightforward – your basic good v. evil battle. Wolf is a very interesting character – enigmatic, tortured and, as you may have already guessed, not always furry. He has his own, very personal reasons for wanting to defeat the ae’Magi. Aralorn was less appealing to me. She’s pleasant enough, but she’s just not a hugely interesting character. She’s small and plain and generally kind of incompetent. She has an interesting background – mercenary then spy – but since she’s never portrayed at being very good at what she does, I found myself frustrated by her and trying to understand why she was given these unorthodox professions (granted, they were not portrayed as being particularly unorthodox for women in the world of the book). About the only thing that does make Aralorn interesting (a bit) is her talent and affinity for storytelling. I would’ve rather she just be a bard, honestly.

Besides not being hugely impressed with the heroine, I was confused by the nature of the magic in Masques. Granted, I read very little fantasy and am not that up on the “rules” of magic, but some explanation and consistency would’ve made the magic in this book feel less arbitrary. There is no explanation of exactly what green magic is or how it differs from the magic that the mages practice. The best I could figure was that those with green magic were the descendants of an old race and their magic was inborn, but perhaps not as powerful (Aralorn is not that good at magic, sigh), whereas wizards like the ae’Magi were humans who have studied in order to acquire their skills. I guess.

There were other aspects of magic that didn’t make sense to me – the ae’Magi is portrayed as incredibly powerful but he’s not even able to recognize that Aralorn possesses magic as well? His abilities often seemed to come and go in service of the plot.

The world of Masques is an interesting one, but this aspect probably more than any other contributed to the “first book” feel. Ultimately, that and my lack of interest in Aralorn as a character weighted down what could have been a great story. That said, I may give the second book a try, if only to read more about Wolf. My grade for Masques is a straight C.