Your Man Law tweets did the job.  It got me interested in reading the book and your editor zipped it over to me in short time.  Man Law, for the readers, are those supposedly unwritten rules of conduct that men are to engage in.  The start of each chapter is prefaced by a new Man Law.  They are cute, like a good preview clip, but after a while I found them to be vaguely sexist and kind of insulting toward men.  It’s probably better to view these pithy sayings as Vic’s Laws.  And he breaks every one of them when he falls for Gina Delgado. 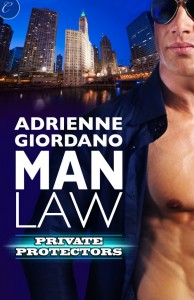 Vic Andrews has lusted after his best friend’s sister, Gina Delgado, for some time.  What prevents them from acting n their mutual attraction is Vic’s fear of intimacy and Gina’s reluctance to get involved with another high risk man. Gina is a firefighter’s widow who raises three kids and works at her brother’s security consulting firm. (Also where Vic works).

But Vic and Gina can’t keep their hands off each other but Vic inadvertently brings danger to Gina when a Middle Eastern former target decides that Vic needs to suffer and then die.  Gina’s children and Gina herself are placed in jeopardy.

There is a lot to like in this story.  Good humor, good “man voice”, and likeable characters.  The problem for me was the writing style.

Each section of the story ended with a one sentence emotional cliffhanger (there is probably a literary word for this but I don’t know what it is). It often seemed like that sentence was at odds with the preceding sections’ paragraphs.  The effort to include these sentences/emotional cliffhangers drove the story into confusing territories.  For example, Vic and Gina are dating. They are having sex. They are trading “I love yous” and then there is this scene:

“I don’t know, he said, clearly teasing her, “what if you get stuck with him?”

Forget that. What if she wanted to be stuck with him? What if she got used to this easy banter and affection? Would it be so wrong?

She shouldn’t even be contemplating it.”

I don’t get that. Isn’t dating, sleeping with someone and telling the other that you love him more than contemplating it?  Isn’t she actually doing it?

I felt like the story was too pared down, that I never got any of the spaces between the action or between the emotional skips from “we are dating” to “in love”.   I felt like I was missing a lot of character and emotional growth in both characters.  They spent a lot of time telling themselves that they didn’t belong together and they couldn’t have a future but not a lot of time figuring out why they did love the other or did believe there was a future.  I was particularly taken aback by the “I love you” exchanges so early in the novel.

The story isn’t a model of consistency either. In another for instance, Mike, Gina’s brother, gives Vic a talking to when they catch a bad guy and Vic wants to “work him over”. Mike won’t even let Vic beat up this guy because they are in the United States and not some third world country and that they have to call in the officials. Vic has a good friend with the FBI. When Vic and others catch wind of some very illegal activity, they don’t work with the FBI on the matter, but instead engage in all sorts of illegal acts themselves. Why was not beating up some guy on your own property (the laws on that sort of thing are very lenient given that you can actually kill an intruder and it be deemed self defense) where as breaking and entering, possible dirtying up a crime scene is okay?

I was actually befuddled by the ending.  The actions of Vic seemed a little TSTL.  Maybe he is supposed to be an unreliable narrator as in his read on Gina wasn’t very insightful and thus his actions were also clueless?  But I felt that the will they or won’t they conflict was unnecessarily protracted and that the aftermath was filled with things that could have been said before but weren’t.

I think I’d read another Giordano book because there are some appealing elements in this story but overall how the story was put together didn’t work for me.  C