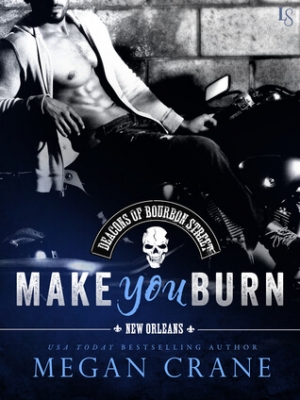 One of my favorite modern HP authors is Caitlin Crews, the alter ego of the author Megan Crane. Make You Burn is the first book in the Deacons of Bourbon Street, a connected series of four books all written by different authors. The four “deacons” return to New Orleans after the death of their old president, Priest Lombard. What they find is a mystery, the bar Priest owned, and his daughter Sophie.

Sophie loved her father, but she always felt like she stood behind the club and not in front of it. When Sean “Ajax” Harding re-enters her life, she feels the same struggle.

There’s an overriding mystery that isn’t resolved in this story and that’s how did Priest die and why did he send his deacons away. Stylistically, the book is heavy on the internal monologue and light on the dialogue. I didn’t mind that because I think the prose is well done and almost lyrical. There’s a certain rhythm to it that makes the story motor for me. But for those who like dialogue heavy books, this one doesn’t have a lot of it.

First, all of the good. The steam seemed to rise off the pavement. I really felt like I was there, in the muggy heat of New Orleans with the smell of stale beer and fresh beignets fighting for dominance on the street. And the club scenes were well drawn and I felt fully immersed inside this motorcycle world. Ajax came off as a dominant male, fairly misogynistic but compelling. I could see him leading a band biker toughs and holding his own within in any fight.

The chemistry between Ajax and Sophie is palpable and the sex scenes were all smoking hot. But I never believed Ajax loved Sophie. To him, Sophie was a symbol. Whenever they had sex or any sexual encounter, it was born out of their anger for each other. I guess the anger was the cover for their sexual attraction but at some point, particularly at the end, I wanted to see that anger turn to a more tender emotion.

It’s possible I was supposed to believe that there wasn’t any tenderness in Ajax but Sophie was written as a vulnerable character, someone who really wanted to believe in the love of her father–that she was more important than the club to him.

What troubled me at the end is that Sophie never found her own voice. There was a scene in the book wherein Sophie is taken to task for being angry in front of the other deacons and a long time member of the club. If they were in front of another club, if, for some reason her behavior imperiled her life and those around her, then I could have stomached that scene. But instead it served as an example of how, yet again, Sophie was to walk behind her man and not beside him.

I really ached for Sophie. In the end I felt she didn’t fully get what she wanted. She didn’t get her bar. She didn’t find any sudden clues that her father cared for her more than the club. I’m not sure she fully got Ajax. She gave herself to him but what did he give her in return.

I think that scene I described two paragraphs up was the turning point for me. In that scene, I could have been convinced that Sophie was Ajax’s equal but instead she was diminished again and again. C