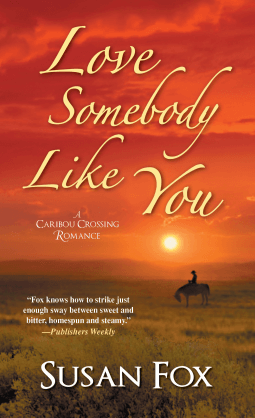 With its breathtaking terrain and welcoming people, the Western town of Caribou Crossing is the perfect place for a heart to heal, and for love to blossom once more…

Since the death of her husband three years ago, young widow Sally Ryland has kept to herself and focused on her struggling business, Ryland Riding. Folks assume she’s still grieving, because Sally has never shared the truth about her abusive marriage, or the trust issues that remain. But when a sexy rodeo rider from her past turns up for a visit, he’s a reminder of the feisty woman she once was—and maybe still could be…

Ben Traynor was always attracted to Sally, but he didn’t move fast enough. Now what Sally needs is patience and gentleness. With an injury keeping him from his next rodeo, Ben has the perfect excuse to stick around and help with her chores—and her healing. And as Sally finds the courage to face her demons and open her heart again, she’ll have to decide if what she has with Ben is more than safety, gratitude, and short-term passion, but a forever love…

This blurb and cover caught my eye at netgalley and since I like contemporary westerns, I decided to give it a go. Since this is book six, I was a little worried about jumping into a long series but I didn’t feel as if I was lost at sea or running to catch up.

It’s got a nice cowboy feel and is very character driven. The horse stuff and horse business stuff sounds realistic given the people I’ve known who’ve done the same thing or who have owned horses. A man who is proficient with a hoof pick and can rake out a stall truly is who you want showing up looking for a place to heal and willing to lend a hand.

Sally’s bad first marriage gives her a genuine reason to avoid men and be wary of ever falling in love again. The long standing mental, physical and emotional damage has done a number on her confidence and made her question her judgment. Unable to face letting anyone know just how bad her life was, she’s just drifted into allowing everyone to believe her still grief stricken at the loss of the love of her life rather than overjoyed at the death of the man who had beat her down and broken her spirit.

Initially former time friend Ben believes the picture she presents and what her estranged sister has told him. The misunderstandings he has about her and her life after she was swept off her feet and left the rodeo circuit are based on their past in which he’d admired her from afar and his belief in the myth of her happy marriage. But her continued unease around him undermines the image she’s trying to sell and since Ben is no idiot, he begins to wonder about what’s changed Sally from the outgoing woman he knew. And he’s afraid the clues he’s putting together lead to one conclusion.

One of the reasons new readers can pick up the series here is that midway through the story, past characters begin to appear on page. Little snippets about them had been introduced along the way so it’s not total character dump and it does serve this story by getting Ben to start thinking of life after rodeo and how to help Sally. Still the story seemed to bog down a touch.

Sally’s changes initially occur slowly – a few steps forward and one back. That Ben is an old friend helps her trust in him. His seeming unending patience doesn’t hurt either. Intimacy arrives in baby steps but then makes giant leaps after a few sexual encounters. Sally and Ben still need some time to think and contemplate a future but while they’re doing it, the story again slows down and meanders to the end.

This is a very character focused book. It’s mainly on Sally and Ben but with past characters showing their current happiness and updates and setting up the next heroines to come. I think Sally’s abuse issues and healing are sensitively shown and the horse sections are enjoyable but a bit of outside plot would have been nice. C