Kelly Davidson has waited what seems like forever to graduate high school and get out of his small-minded, small town. But when he arrives at Hope University, he quickly realizes finding his Prince Charming isn’t so easy. Everyone here is already out. In fact, Kelly could be the only virgin on campus.

Worst of all, he’s landed the charming, handsome, gay campus Casanova as a roommate, whose bed might as well be equipped with a revolving door.

Walter Lucas doesn’t believe in storybook love. Everyone is better off having as much fun as possible with as many people as possible…except his shy, sad little sack of a roommate is seriously screwing up his world view.

As Walter sets out to lure Kelly out of his shell, staying just friends is harder than he anticipated. He discovers love is a crash course in determination. To make the grade, he’ll have to finally show up for class…and overcome his own private fear that love was never meant to last.

Warning: This story contains lingering glances, milder than usual sexual content for this author, and a steamy dance-floor kiss. Story has no dairy or egg content, but may contain almonds.

Dear Ms. Cullinan,
Your books are an auto buy for me, so I was very eager to review this one. Unfortunately this book ended up being a mixed bag for me. While I really liked both characters, the initial setup of the story felt heavy handed and manipulative and I had to force myself to continue reading the story. 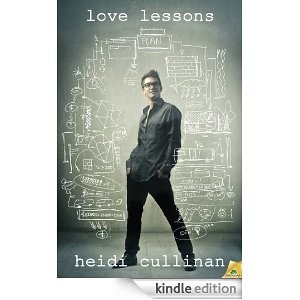 The story begins with Walter trying to convince the Dean to allow him to continue living off campus alone. But Dean Williams is not having it; Walter cannot live alone because the university wants to take care of him in light of his tough family situation (we do not know yet what that situation is). Apparently that means sticking him in a dorm with a freshman even though Walter is a junior. The Board of Regents were even involved, as they discussed Walter’s situation and refused to let him live off campus. Now, I did not go to the college in the US, I only went to a graduate- level educational institution, and housing rules were not something that I was ever concerned with. I have friends, who did go to college here, however, and I read books and watch movies set in U.S. colleges, and this situation made me raise eyebrows right away, because the idea that college would not allow a junior student live off campus seemed weird to me. Now, of course I hesitate to make the statement that this cannot ever happen – I have no clue what is happening in every college in the United States. However, I can say that at the very least such set up requires an unusual suspension of disbelief.

I understand that this set up was required in order to get our characters together – Walter and Kelly end up as roommates, but as I mentioned above I wanted something less heavy- handed. It felt even heavier handed to me that openly gay students (especially shy freshman like Kelly) end up living in a dorm that is universally considered the most homophobic in college housing. Why would Dean Williams allow it? And why would all jocks be considered homophobic? Can’t at least some of them be regular students who are also gifted in sports? I thought the book was stereotyping the students. I was already imagining scenario of Kelly being bullied and Walter protecting him later on. Yeah, I was right. Again, this development felt heavy- handed and manipulative to me. At the very least there was no huge beating happening – I was grateful for that, but Kelly definitely suffered from subtle bullying unless Walter was with him. I just thought that the situation could have been easily avoided and when I have thoughts like this, I feel that author’s hand is more visible than I would like it to be.

But I forced myself to continue and when Walter and Kelly meet and become friends and eventually lovers I did not have to do much forcing to keep reading. Walter seemed like quite a jerk to me initially with him describing Dean Williams like this and casually throwing the remarks like “Fag Hag” to Kelly.:

Dean Stevens was one of those back-end-of-middle-age women who, while once lovely, had missed the memo that declared wrinkled cleavage gross, boldly wearing plunging necklines without any viable flesh to keep them from being black holes of eww. Though he tried not to look at her chest while she greeted him and ushered him back into her office, it drew his focus like a lighthouse. A scary lighthouse.

However, I really appreciated that Walter had never been a jerk to Kelly. I loved how while he was initially attracted, he was determined to be friends and helped him and protected him when he could. Walter obviously has plenty of issues and was a flawed character but I warmed up to him immensely when I saw how he treated Kelly. Granted, I can never understand why the character that is having a lot of casual sex in m/m romance is usually shown as having issues. Isn’t this okay for a young man (or a woman for that matter) in their early twenties just enjoy himself and have fun? Do not get me wrong, Walter’s issues seem to make sense , and him learning that true love is possible was a beautiful thing to watch, but I suppose I am getting tired of this trope and do not think it is true as often as the authors seem to write it.

Kelly was adorable with his love of Disney movies and eagerness to get rid of his virginity with the right person – I have no problem with the virgin characters and Kelly is a very memorable one. His journey is about taking control of his life, figuring out what he wants and learning how to get it. I thought Kelly had changed a lot by the end of the story and I loved his character arc. I really appreciated that the first sex scene between guys did not appear until about 60% into the story on my kindle and overall the story probably has three sex scenes. For these characters it seemed very appropriate, but if you are a reader who wants a lot of sex in your stories, this one is probably not for you.

For all that it took Walter a long time to have the courage to admit to himself that he wants to be more than friends with Kelly (a bit longer than it did for Kelly because he had more demons than Kelly to overcome), it worked really well that they became friends first. I enjoyed that for all their doubts they managed to communicate better than many couples I have read about: no, it was not a perfect communication, but they avoided silly misunderstandings and unnecessary miscommunications, and they were really good together:
“For a long time they stood there, embracing and breathing slowly. Eventually Kelly spoke. “ I don’t want to screw this up either. You’re the best friend I’ve ever had. You…you’re everything”
The words cut Walter open, both what he longed to hear and what he feared to hear at the same time. Everything about Kelly undid him, made him feel lost and found at the same time. He stroked Kelly’s hair, letting his thumb catch on his ear. “So what do we do now?”
“I have no idea.” Kelly shivered. “Maybe we start by heading back to your car and turn on the heater?”

I do want to talk about the portrayal of the women in this story – as some of you may know; it is one of my hot buttons in m/m romance. I will confess that description of Dean Williams and “fag hag” did not make me optimistic at the beginning of the story. However, I felt better as the story went along – flawed women were not demonized in my opinion and Kelly’s mom and Kelly’s friend Rose were pretty awesome. I was disappointed that even Walter’s best friend was not there for him when he needed her – it is as if more women in the story did not measure up to certain standard (whatever that standard was supposed to be) than the ones that did. However, as I said, at the end I thought that I was more or less ok – the writer at least tried to present various women in her story and did not make the caricatures out of the flawed ones.
Overall I liked the romance in the story, but I wished it was set up much better than it was. Grade C.