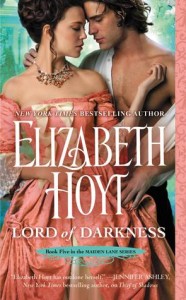 I felt schizophrenic reading this book.  Part of the story of Lady Margaret Reading and Godric St. John is heartwrenching, subtle and evocative.  Part of it lacks believability, relies too heavily on past characters and books, and plods along at speeds that a snail would get impatient with.

In a previous book, Lady Margaret Reading or “Megs” fell in love and allowed herself not only to be seduced but impregnated by a man who is then killed.  Megs believes the killer is the Ghost of St. Giles.  She is hastily married off to Godric St. John under threat of blackmail by Megs’ brother.

Lord of Darkness opens with Megs returning to London after a two year self imposed exile into the country with two tasks. She will avenge her dead lover’s death by going into the slums of London, finding the elusive Ghost of St. Giles, and killing him.  She will also get impregnated by her husband Godric.  Megs declares that she will never love again but having suffered a miscarriage she determines that the only way to go foreward is to have a child.  Given that she is not interested in cuckolding her husband, he must be the one to father her child.

Godric married the love of his life, Clara; but after only one year of bliss, Clara fell ill.  He was informed that even the slightest movement may cause her pain and thus he removed himself from their marriage bed and remained steadfast by her side for nine years while she wasted away in pained illness.  Godric’s love for Clara was so great that he informs Megs:

“I agreed to Griffin’s mad plan,” he rasped, his voice like gravel, “only because it was more than obvious that you would never have any interest in me or a real marriage.”

“But—” she said, realizing suddenly how this was going to end. She took a step forward, her hands reaching for him, fruitlessly clutching empty air in front of her.

“No.” The word was grimly final. “I haven’t lain with another woman since I married Clara, and I never intend to do so. I had my love. Anything else would be a parody of intimacy. So, no, Margaret, I am sorry, but I will not lie with you to make a baby.

Godric’s pain in this scene is visceral yet all the emotion that is developed is dashed away when a day or so later, Godric agrees to lie with Megs to give her that child she wants.  Not only does he lie with her, but he wants to pleasure her while doing so.   The transformation between “I’ve never lain with another woman and don’t intend to do so” to being so jealous over her flirtation with another man that people in the ballroom buzz about a potential duel is too swift for me.  I wished that Godric’s appreciation of Megs’ vivaciousness was revealed earlier in the story. There was no reason for that to be hidden and it would have helped to make Godric’s turnabout more palatable.

I found Megs to be frustratingly obtuse about the character of her dead lover who a) debauched a virgin b) ruined her c) got her pregnant and d) never married her. COME ON MEGS.

The love scenes in this book are superbly written to advance the emotional conflict.  It is in the bedroom and between their lust dampened skin that they fight and overcome their past romances.

The external elements feel like a crutch and gives rise to some of the more melodramatic lines and activities such as Megs telling Godric “I think you lose a bit of your soul every time you go out as the Ghost of St. Giles.”  Lines like those are so obvious and yet do not pull out the same emotion as the gut wrenching “Please” voiced by Megs during one lovemaking session when Godric’s pleasuring of her makes her feel like she is violating a death bed oath to her dead lover.

I’m ready for the Ghost of St. Giles to be retired.   When the story focuses on Megs and Godric’s struggle to be true to their past loves yet willing to open themselves up to a new one that the writing shines and I am truly swept away.  When I am forced to read about Megs’ plans for revenge and Godric’s roof top jumping, it becomes boring, trite and unbelievable.  C