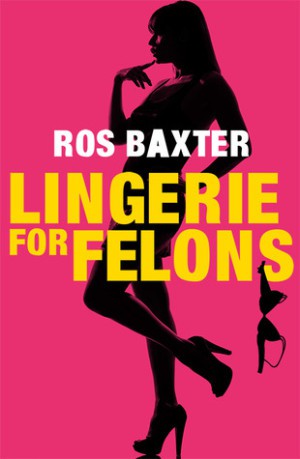 Lingerie For Felons is a little hard to categorize: after a beginning that feels like New Adult, it settles into chicklit, then veers into “women’s fiction” in the second half. (With a final veer into fantasy/fairy tale.) Overall, I think it’s a coming of age story — just one that takes fifteen years to happen.

American liberal Democrat Lola narrates the story of her life from 1998 to 2012 in a rambling, flashback-laden style, framed by descriptions of the four times she was arrested or detained as a political activist. Each of those times also coincides with a meeting with her first love, a good-natured, comfortably large Australian named Wayne. Lola’s first arrest happens shortly after she and Wayne broke up, for what she considers irreconcilable differences. Her liberal politics are all important to her — her first crush was on Nelson Mandela — and Wayne just seems to be out to make money, not caring where it comes from.

Despite her strong social conscience, Lola doesn’t have the faintest idea how to change the world, a fact which sincerely agonizes her. But what she mostly seems to do is get drunk a lot, berate people for their views, and hang out with her friends and family (a nicely diverse group, all of whom get time in the story.) When she does try to act, it always seems to wind up with her arrested, fearing a strip search, and cursing her choices in underwear. And running into Wayne, who never stops wanting to be with her, despite being continually rejected.

My feelings about this book are extraordinarily mixed. It was very funny at times, and I found it strangely compelling, despite the fact that I often disliked Lola. She’s supposed to be someone whose passion and fire changes others for the better, but she mostly seems unconsciously privileged and self-absorbed. (A trait she often complains about in others, which may be a deliberate irony in the text. “God, more pots and kettles,” she thinks when her sister criticizes her. “Amazing how truly little self-knowledge people have.”) If the point is to be satiric about bleeding hearts, it doesn’t quite come off.  Thankfully, Lola grows up and finds meaningful, everyday ways to make the world better, and her comic activism takes a more serious turn. (Though this is somewhat undercut by a highly implausible ending.)

The resolution of Lola’s feelings towards Wayne, which should be romantic, instead struck me as intensely sad.

One of the first things we learn about Wayne is that he wants to have “stacks of kids”; instead, he spent 15 lonely years waiting for Lola to come to her senses. For most of the book, I thought it ridiculous that his life seemed to be frozen, so that he’s always on tap for her; by the end, my heart just bled for him.

I also found it hard to believe Lola still had such strong feelings for Wayne, when she pushed him away for so long. He had become someone she could reasonably be with — specializing in “green” shipping — years before.

It wasn’t a big issue for me, but it’s obvious the author isn’t American. I kept being a little jarred out of the story by phrases like “up their bum” or ” a good frocking up,” and wished she had just made all the characters Australian. Portrayals of “ugly American” characters which are supposed to be satiric also struck a wrong note.

But though initially I wished the story was shorter and tighter, by the end I sort of loved the wacky ensemble cast — from Lola’s mother, who tries to comfort her during labor by telling her, “I know, I know…it feels like you’re shitting out a microwave oven,” to her resourceful best friend, who has her husband practice for his IVF sperm donation:

This was such a mixed bag of good and bad for me, I have to go with an average grade. C