REVIEW: Light in the Shadows by A. Meredith Walters

[There are spoilers for Find You in the Dark in the following review.]

This is the sequel to a self published bestseller released last year titled “Find You in the Dark.”  The male protagonist, Clay, in FYitD suffers from bi polar disease and in the first book, his illness manifests itself in various ways resulting in a suicide attempt. 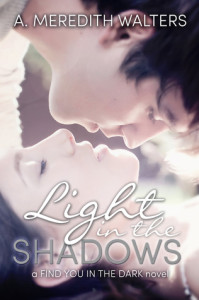 Maggie fell in love with Clay and his influence on her becomes quite negative.  She begins lying to her family, distancing herself from her friends.  She becomes ready to walk over a cliff with him, emotionally and almost physically.  Find You in the Dark leaves the book on both a sad and hopeful note.  Maggie comes to realize she can’t save Clay and Clay is sent to a hospital specializing in mental health issues.

Light in the Shadows is Clay’s journey out of the hospital and back to Maggie.  While it a less powerful book, emotionally, than its predecessor it leaves the reader more satisfied in the outcome.

The primary problem in this sequel is that there is no suspense. Maggie has not moved on from Clay but instead is working on finishing her last year in high school and trying to make a decision about where she is going to go to college. She still clings to her love for him even though it is painful.

Clay’s life is decimated by yet another loss and you think that this kid just can’t catch a break.  When he returns to his hometown, he cannot stay away from Maggie even though he’s been told he’s not ready to form a significant emotional bond again.

Watching Maggie and Clay tussle with his mental health illness was interesting. Maggie constantly worries about whether Clay is taking his medication.  Clay gets frustrated with Maggie’s distrust yet at the same time understands that his past behavior is the root of her issues.

I appreciated that Clay’s disease was shown as not just acceptable but treatable but one that would require a lifelong attention.  It wasn’t as if he was fully healed at the end of the book or that he didn’t struggle from time to time.  The realism infused with hope was the best part.

However, the story was rather flat and part of that is because Clay was getting better and thus the dark moments were fewer.  This story is best read in conjunction with the first, rather than a stand alone on its own. I think putting the two books together creates a more cohesive and interesting reading experience rather than the first one, released last year, and then this one because this last entry had so little emotional movement and was rather one long denouement from the dark moment that crescendoed in Find You in the Dark.

Clay and Maggie are still in high school so I don’t know where it falls either, in New Adult or Young Adult. Clay is really an adult for all intents and purposes in this story. He’s in charge of his own treatment, having reached majority and his parents have no involvement in his life.  Maggie’s on the cusp of graduation from high school. I had a hard time grading this book. On the one hand, the sensitive treatment of bi polar disease was great to read and I loved the message that this story sent.  On the other hand, I struggled to really connect to either character this time around.  C