This book was really a struggle for me and I wasn’t quite sure how to approach the review.  Ideally books should be reviewed based solely on what happens within the contents of the story.  Yet Lethal Rider is the third book in a series of four about the Four Horsemen of the Apocalypse and because there is an overarching plot thread, it is difficult to pick up in the middle of the series and be able to fully comprehend the machinations and goals of the characters.  Further, important events leading up to Lethal Rider happen on page in Immortal Rider. 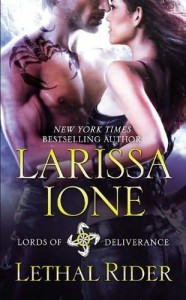 Regan is an Aegis Guardian, a human who is charged with protecting the world from evil.  She intentionally impregnated herself on an unwilling Thanatos.  Thanatos is one of the Four Horsemen of the Apocalypse.  His “seal” was to remain unbroken in order to prevent the Apocalypse from coming, according to the prophecy.  Thanatos believed that his seal was sex and he guarded his virginity for five thousand years.  When Regan takes his virginity and his seed, Thanatos and those around him fear his seal has been broken. (har har har)  His brother and sister choose to paralyze him with hellhound venom for eight months after his night of sex leads to a deadly rampage by Thanatos.
Thanatos one day is able to free himself, capture Regan and return to his stronghold.

This is a complicated world, one that has been built up over a series of books dating back to Pleasure Unbound, the first in the Demonica series.  Because of that, it is important that a reader reviews the glossary at the beginning to get a sense of the world. It’s not always imparted in the text.  There seems to be a conscious decision that those who are reading are assumed to be familiar with the ongoing struggle. Unfortunately, I think that the book could use some judiciously placed info dumping because even I, who have read many of the books in the series, often felt lost and disoriented.  What was the “evil” that the Guardians, demons, angels were fighting?  What is the Apocalypse? Why was Thanatos suddenly able to free himself? Why was it this time that the hellhound venom wore off enough that he could escape?  It was so easy to capture Regan and spirit her away that it was laughable. A few threats, a few humans dead, and he and Regan are off to safety (for him).

I had a hard time relating to Regan.  Despite being human, she exhibits a certain disregard for humanity.  She appears to care little for Thanatos’ feelings.  Stealing his virginity, his seed, does not appear to be violative to her.  She has no plans to raise the child herself, instead giving it to another Guardian.  She’s had some intense sexual encounters with Thanatos in Immortal Rider but still seems to be clueless about the emotional damage she was inflicting.  Conversely her feelings are hurt when Thanatos intimates that he doesn’t want her but only the baby.  Regan has a history of being unloved and perhaps both her hurt and supposed lack of feeling stems from her upbringing but the dichotomy in her presentation was difficult for me to grasp.

Thanatos was not apparently concerned about having sex with Regan or even being violated by her.  Instead, his focus was on her betrayal.  She had come to him under subterfuge and he had feelings for her.  They exchanged some heated sexual encounters before Regan raped him and the text of Lethal Rider seems to want the reader to understand that it wasn’t the sex, but the emotion behind it and then the subsequent actions that intended to keep his child from him was the real source of his distrust and animosity.  Later Thanatos tells Regan that they both wanted each other but that the drugs took their mutual choice away.  “I wanted it. We both wanted it.”  Thanatos absolves Regan of any wrongdoing.

What a reader does get from an Ione book is humor, sexiness, and interesting characters.  This novel is no different.  The seriousness of the issues are offset by biting banter.  Thanatos’ naiveté about sex was humorous.  I rolled my eyes at Regan’s nimbleness at being 9 months and counting which includes everything from trying to run away from Thanatos to rambunctious bouts of nine month pregnancy sex.

I appreciate the complexity of the world but I felt like it is ever changing. I could not get a handle on the boundaries.  Even though “evil” is referenced, the line between good and evil is quite blurred.  Everyone seems to be engaged in rampant and senseless killings. There is a power struggle between factions but the morality of the characters isn’t sharply defined.  In some sense, it is every person for themselves and sometimes, while objectively appreciating the provocativeness of this, it is hard to allow myself to sympathize with any of the characters.   I vacillated between a C and C+ in this story but eventually went with a C.