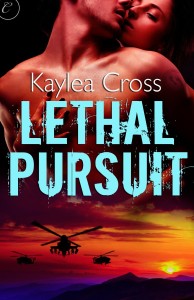 I’ve read the first in the Bagram Special Ops series but not the second. What I liked about the first one is present in this story. There is a strong female lead.  This time the heroine is Security Forces Lieutenant Maya Lopez, which I understand to essentially be a police officer on base as well as assisting in directing and coordinating safety for deployed military. The hero is pararescue jumper Jackson Thatcher. They have the hots for each other despite their disparate rank. She’s an officer; he’s an enlisted.  I worried that this conflict was going to be a repeat of book one which featured a female officer fighting her attraction because of the non fraternity policy in the military.  Thankfully that is not the issue that both keeps Jackson and Maya apart.

The two of them are kidnapped along with the Secretary of Defense by an Afghan warlord and they must escape and get to freedom. (I don’t think this is a spoiler because it is in the excerpt at Author Website).

The things I liked about the book was the realism of the war setting. I felt like I was there and amidst the action. Maya is shown as capable and good at her job.  The action and adventure part of the book was the strongest. Maya’s difficulty with relationships was also well conveyed.  Jackson is a good ol’ southern boy who plays the piano and sings like a dream.  Jackson repeatedly tells us that he is an enlightened male who was raised in a female household. He respects Maya but he doesn’t feel comfortable with her protecting him.  In fact, this is something that is almost thematic.  During a late shoot out, he is angered by Maya’s actions. I didn’t get a sense from the story that she was taking chances that she wasn’t capable of executing and certainly a male character doing this wouldn’t have been dressed down. Or so it seemed to me.

After they are captured, Jackson, Maya and the Secretary of Defense endure repeated acts of brutality.  These scenes may be too graphic for some readers and while they made the incarceration real, that Maya was never raped seemed almost a cop out given all the other things she had to endure.

In the first in the series there were scenes from the Afghans’ point of view – the ones who are trying to kill Americans. That was my least favorite part in book one and it’s my least favorite part of this book. I didn’t understand the purpose of putting those scenes in. By positioning the Afghans as the villains and peppering all their speech with religious mandates, I felt like I was party to something distasteful. The US military was shown giving medical aid and handing out food.  The Afghans are shown as radicalized religious fanatics determined to hurt people until the Americans were expelled from their soil. There are actually two leaders in the Afghan tribe and one leader is more “sympathetic” than the other.  And yes, he’s not a true Afghan. That was even more troubling for me. If we were supposed to feel sympathy for them, then I think a less fanatical representation of their culture would be more useful. In all, I just wish those scenes were excluded. They didn’t add to the suspense and I felt like they detracted from the romance.

While I appreciate that these are gritty stories set in Afghanistan and are trying to present a realistic picture of what it means to be in war, I think that the romance took a back seat to the action storyline. There wasn’t enough emotional romance in the story for me and while I understood objectively how the two are drawn together by their early attraction and then by their subsequent shared trauma, the main focus of the story seemed to be more about the Afghan rebels, the incarceration and escape to safety.  C