I really enjoyed Rules of Seduction and was greatly anticipating Lessons of Desire and the story of the independent and unconventional Phaedra Blair. When I began the book, I was even more interested because I could see that the story that was going to unfold was an exploration of a fundamental feminist issue of alone and unhappy v. together and happy. Because I knew how it woud end, I was intensely curious to see how the issue of female independence would be handled. 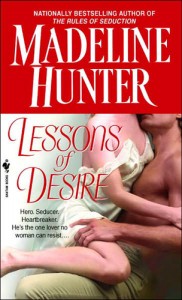 Phaedra Blair is the daughter of a famous independent female thinker Artemis who taught Phaedra to love freely. Her father, Richard Drury, was a respected member of Parliament and another intellectual. Richard and Artemis shared a “great love” but never married as Artemis maintained that marriage would rob her of her independence. On Richard’s deathbed he gives his memoirs to his illegitimate daughter, Phaedra, and extracts her promise to see the memoirs published. Upon reading them, though, she discovers that her mother had strayed from her father’s bed and that the lover that her mother took may have led to her death.

Richard Drury’s memoirs contained information that could be besmirch the reputations of current members of Society. Elliot Rothwell is dispatched by his family to negotiate with Phaedra for the exclusion of a story about Rothwell’s father. Elliot’s mother and father were famously estranged. Elliot’s mother had taken a lover and some believe that she was banished to the countryside for that. The story included in the memoirs suggest something even more nefarious. Elliot’s experience with love was very destructive, yet strangely, he is not afraid of Phaedra changing his life.

Phaedra, on the other hand, her experience with love was positive but she is afraid. I felt like Phaedra’s platform of interaction with Elliot was always from a position of fear. She feared not being in control. She feared the erosion of her independence.

The perfect love that Phaedra pronounces is one that is unfettered by obligation or responsibility. Her mantra was like that of another literary Phedre (Kushiel series)–“Love as thou wilt.” But Phaedra in her own way is as rigid as those that she despises; those who live by those silly society rules. Elliot points out “I do not speak of the law or of customs or finances, but of living. I am not alone or unfettered by others. There are my brothers ever-present in my life, and other relatives with claims on me. I am theirs and they are mine. Even if my brothers and I grow to hate each other, the burdens of life are shared.”

The biggest problem in the portrayal of Phaedra is that she is constantly getting into situations which require her to be saved by Lord Elliott. Elliot’s arrival was necessary for her release from prison. She could not even mount a donkey by herself. Further, Phaedra is depicted as headstrong and Elliott rational. Phaedra is irrational where Elliott is wise. Elliott is portrayed as the noble man. Elliot is the one to teach Phaedra that true freedom is illusory. I felt that there were few lessons that Elliot was taught in this man/woman struggle.

I know it sounds like I didn’t like the book. I did. What I did appreciate was that in coming to love Elliot, Phaedra realized that she need not sacrifice herself and her beliefs of being independent. I did like the juxtaposition that Elliot, as a man connected to his family, had more constraints on his actions than did Phaedra, a woman. I thought it was a great attempt at addressing the issues of feminism during the time period and making it relevant even for the modern woman. I wish I had seen Phaedra, however, in more positions of power and not so in need of saving. C.

→ Jane
Previous article: CORRECTION: YouTube Will Not Have 30 Sec Ad Bumpers. Choose Overlays Instead
Next Post: REVIEW: The Wedding Officer by Anthony Capella