Originally published in 2003, this anthology has now been reissued by Harlequin. I’ve read all three authors before, though it’s been awhile for two of them, so I went into the anthology with a little bit of preconception – both good and bad – but I was hoping and willing to be wowed all around. For various reasons, this didn’t happen. Two of the stories aren’t bad but one hit most of my bad buttons.

Pregnant and alone on the Colorado prairie, Rebecca Hathaway’s prayers were answered–by rugged Wolf Dreamer.Will her search for home and family lead them to a new life together? 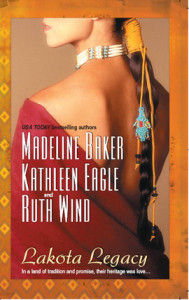 I read some of your books years ago and I can say your style hasn’t changed. We have a passive, helpless heroine who brings out the dominant hero’s possessive and protective streak. Plus there’s kind of a fated mate feel to story which got skeevy at times. Wolf Dreamer has watched Rebecca every day for 5 years? Then, even though he knows she wants to go back East, he takes her to his tribe anyway and basically tells her “this is the way it’s going to be because of my dream.” Rebecca is a rapist magnet with 3 different sets of eeeevil white men attempting it – and there are almost no other white men in the story besides the eeeevil ones – until the noble hero shoots them all. The delicate snowflake heroine runs off multiple times, almost always getting into trouble due to her magnet ability, until the last time Wolf Dreamer kills for her and tells her she’s a lot of trouble. He said a mouthful. I was hoping to avoid the almost obligatory “insanely jealous Indian maiden who covets the hero’s bod and will do nasty things to sweet heroine to get it” but, alas, no. The ending is just too perfect. Suddenly Rebecca’s in love? Ready to be a Lakota living a lifestyle so different from anything she’s ever known? I couldn’t buy any of it. The only thing that raises this to a D is the care with which Wolf Dreamer treats Rebecca after her initial miscarriage.

Meredith Woodward had emptied her nest. She didn’t need a scruffy rodeo cowboy moving into her home–or her world. But Ryder Red Hawk was a man prepared to face his past and discover his future–with her.

This has the smooth, easy writing style I’ve come to expect from your books. The characterization is almost effortless and within two pages I feel that I know these two people. I love that it’s an older couple romance, too. She’s a little shy about her figure. He’s got salt and pepper hair and knees that don’t take to kneeling too long anymore. They’re opposites attract – she’s a homebody and he’s a wanderer. She’s got a fancy kitchen and loves wine while he’s got a cast iron stomach for anything and prefers kicking back with a cold one. The growing attraction works well. The tip over into the physical is that of two people who’ve been around a bit know a bit more about attraction and are ready to go for it. The back scene views of Ryder at work at the rodeo are fascinating without being fetishizing. I can even accept the sudden HEA. But something about Meredith’s fascination with Ryder’s Indian heritage seems “off” and at times a little too intense. It’s no big deal to him but she brings it up again and again until even he seems puzzled by it. I realize that this was the way to carry through the story arc and it does point out the issue of Indian children being taken from tribes back in the day to be raised by white families but the heavy hand here stands out in comparison to how the rest of the issues were so nicely handled. C

Sunny Kendricks’s luck had run out. With no money, no car and no home, she was sure she’d hit rock bottom. But Michael Chasing Horse was prepared for life’s storms and ready to offer refuge…in his arms.

Michael’s a quiet, cowboy hero. Slightly older and a bit threadbare from the drought but still in love with the land and determined to stay. He’s doubtful of this pretty, young woman being able to take the challenges of eastern Colorado living but in her own way, Sunny is as strong as he is having endured the challenges of her young daughter’s medical issues. I can picture this land and these two people – so similar despite their apparent differences. Still the 7 days til “I’ll love you forever” seem too rushed in spite of the tornado and wildfires that serve to bring them closer and quickly reveal to the other their strengths and character. I could accept them deciding to develop a deeper relationship and the novella ending on a HFN note but for both of them to be survivors of past bad marriages and take the plunge that quickly didn’t work for me. This is a story I would love to have seen fleshed out into a longer novella or full length story. C