I saw Kamikaze listed as a free book and an introduction to your new self-published series, Last Call. The cover seemed eye-catching enough and the blurb promised smoking hot action. Sounds good to me. This read did exactly what it promised – it was short and physical. Unfortunately I struggled to connect to either character. 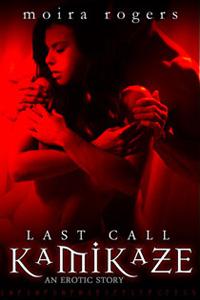 The premise for Kamikaze is a fun one. There is a bar called Last Call, where supernatural women can order a specific drink, and that drink telegraphs to the men in the bar what she is there for. I thought that sounded like a fun set-up, especially for a shorter work, and was intrigued. Zoe Bennett is the heroine of the story, and she is a werewolf who is in heat and needs a man. She doesn’t have one, so she shows up to Last Call and orders a Kamikaze: werewolf in heat, looking for temporary mate.

Connor O’Malley is a werewolf working on the security systems at Last Call. He sees Zoe and steals her away before the other men can stampede in their race to get to her, and convinces her to go upstairs with him. They go upstairs and have lots of sex.

That’s the entire storyline; there are no hidden depths to this story as it’s very short. It’s thirty pages long, and in actuality, this feels like both the story is too long and too short. It’s too short in the way of the characters. I don’t know anything about Connor other than he has an Irish name, is a werewolf, and works security systems. I don’t know anything about Zoe other than she’s looking for a man. Both characters are very vaguely sketched out, leaving me not much to root for. These two feel like strangers to me, and in the hands of an author with stronger characterization skills, it could have come across as part of the plot to see them slowly learn about each other. I just found these two boring.

The story also felt very long because the vast majority of it is sex. And after a few scenes of them having sex, it became dull for me. The sex was well written but lacking spark, and it should have been hotter. Also, other than the mentions of the werewolf nature of the two characters and the fact that Zoe is in heat, there are no supernatural goings-on in the story. I would have liked more, but there was only 30 pages to work with.

It was a free read, and I don’t regret reading it, but I’m going to have to say that your writing just doesn’t work for me. Which is a shame, because I like the concept of the series, and some of the later stories look fun. But after struggling to finish even 30 pages? I’m afraid I’m out. It’s not you, it’s me. This one gets a C .