Thanks to Jane’s foray into the genre last year, I’ve grown curious about New Adult novels. I’ve given a couple a try within the past month and the results have left me rather dubious. That said, I’ve enjoyed novels featuring older teens who are graduating or have just graduated from high school. Based on some recommendations, I picked up If I Stay and Where She Went and loved them both. So I eagerly looked forward to your new novel. Unfortunately, I don’t think it lived up to the hype. 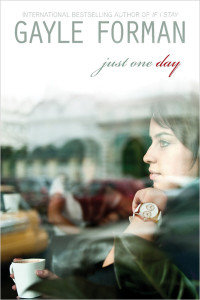 Allyson Healey has lived her entire life in a neat little box mapped out by her parents. But during a European tour after high school graduation, she meets an actor named Willem. There’s instant attraction and Allyson is charmed. When Willem invites her to spend one day in Paris with him, she decides to be impulsive for once and agrees to accompany him instead of heading to London with her best friend.

That day in Paris is magical and Allyson learns to take life as it comes, to pounce on the chances that come her way. But after a night of sex, she wakes up to find herself alone. Devastated, Allyson returns to London to meet up with her friend, and from there to the U.S. where she heads off to college in the fall. What follows is a year of self-discovery and picking up the pieces after Allyson’s first attempt at seizing the day results in disaster.

Despite my best intentions to keep an open mind, I go into novels with expectations. If I Stay and Where She Went were so emotionally visceral and I suppose I expected more of that here. I didn’t really get it.

Maybe it was the pacing. The summer stint in Europe took up more than a third of the novel. That doesn’t leave much room for self-discovery. In truth, what happens is that Allyson spends half of her freshman year in college in a deep depression. She attempts to return to the box outlined for her but finds she no longer fits because she’s discovered the world the exists beyond it. This dissonance affects all aspects of her life. Her once-perfect grades plummet. Her friendships stumble and fail.

Of course, all that would have been fine within the context of a story if more weight had been given to the idea of self-discovery. Instead the shadow of Willem dominated everything. I just can’t get behind the portrayal of a one-night stand derailing someone’s life so badly. Yes, she was a teenager — an older one, true, but still a teenager. But even so, Allyson wasn’t a virgin. She’d had a boyfriend. Yes, she thought she’d fallen in love. But because of her age, I wasn’t convinced. This is my age speaking but we know this story. One-night stands where the girl thinks she has a deep connection with the guy but the guy acts like he barely even knows her the next morning? Such a common tale. I realize knowing it happens is different from having it actually happen to you but the entire thing left a bad taste in my mouth.

Part of my feelings can be chalked up to the knowledge that Just One Day is the first half of a duology. The follow-up will be told from Willem’s point of view. I can already guess how it’ll go. He didn’t actually leave her alone the next morning. He had a reason! He’s not an asshole. If Allyson had only waited and had faith in their love, there’d been no reason for that year of moping. It was all just a misunderstanding. But if that’s the case, I would have liked for Allyson’s half of the tale to focus more on self-discovery and globe-trotting, the latter of which takes up less than 100 pages of the novel.

In many ways, I think Just One Day is attempting to replicate the magic of If I Stay and Where She Went. If that’s the case, it fails. It didn’t have the same romantic and emotional impact. The themes of self-actualization and discovery despite — or in spite of — life-changing love don’t ring as strongly. If there’d been more focus on Allyson learning to enjoy life for herself and on her own terms instead of her life being affected by Willem on many levels, maybe I would have enjoyed it more. That, I feel, is the spark missing from this story. Theoretically, I like the idea of chance meetings altering the shape of your life. But what I dislike is that chance meeting becoming the source of all your sadness, joy, and motivation. How is that empowering? C