I had high expectations for this book after reading the Recommended Read review from Sunita of In His Eyes. Unfortunately the magic of that resonated in In His Eyes for Sunita didn’t carry over for me into Just for Today. It started out poorly when the hero, Sean Paterson, is described as the black sheep of his family of accountants. Despite his success as a comic book artist and horror novels, he is still looked upon disapprovingly. I’m sure Neil Gaiman’s family thinks to themselves, that poor schmuck earning money with his pencil instead of the calculator. He hit #1 on the NYTimes list, but we shall shun him and badger him into accounting where real men work.

This idea of him being frowned upon by his family when he was so successful lacked even a modicum of believability:

He was a multipublished author, so famous in his genre that his latest release commanded elaborate in-store promotion like cardboard cutouts and entire shelves dedicated to his new book.

“So,” Jess began when she’d taken enough deep breaths to calm herself, “why did Hailey tell me that you weren’t very successful? The way she described it, you’d written one or two books that were, well, struggling. Even Rob never said much about it.”

Sean shrugged. “Hailey has been spending a lot of time with my mother, from what I understand.”

Jess shook her head, not sure what he was getting at. “So?”

“So they have no idea what I do, what I’ve achieved.”

“Why haven’t you told them?” 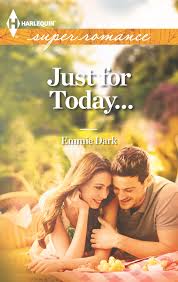 From the very beginning, the set up for Sean doesn’t work for me.  There is a slight bit of slut shaming as veterinarian Jess Alexander, the heroine, doesn’t do one night stands because she’s “not that kind of girl.” (Words repeated from the blurb). Only she must be because she goes home with Sean on the night of her nurse’s wedding to Sean’s brother.

The old chestnut of the good girl and bad boy is repeated throughout the story without any surprises or twists.  And Sean isn’t even bad and I’m not sure how Jess qualifies as good since she does go home with Sean that first night.  By her own standards, I think she’d fall within the not-so-good category.

If we could have stripped away the labels and not had that been the conflict, Just for Today, could have worked because Jess, in particular, was more interesting than the early pages make her out to be.  She runs out on Sean, uninterested in more than a one night stand, and this is an affront to Sean who wanted a bonus early morning round at the very least.

When the housesitter hired by Sean’s brother flakes as the brother is about to leave on his honeymoon, Sean agrees to stay for six weeks.  Because Sean is an inept creative type, he breaks the plumbing, misses the dog eating some pills, and is generally not to be trusted doing anything responsible.  At times he was portrayed as incapable of taking care of himself.

Portraying Sean as this hapless lothario was kind weird.  He had tons of short term relationships but was so spacey that he’d often drift off into his fantasy world involving his main character in the middle of actual conversations.  It was hard to see Sean as both socially awkward and so amazing with the ladies that he had a bad boy reputation.  There wasn’t anything “bad” about Sean. He was successful, a good listener, and understanding.

Jess’ feelings of inadequacy based on her husband’s infidelity was more understandable. Her vulnerability well conveyed.  However, for adult as these two characters were supposed to be, their interactions were fraught with immature behavior.  I guess it was for the conflict.

While the book had potential, it never delivered for me, relying too heavily on overly common character tropes.  C