REVIEW: Jane and the Damned by Janet Mullany

When I heard you were going to write a Regency paranormal, my initial thoughts were, “Why?” No, actually they were more along the lines of “You’ve got to be shitting me. Jane Austen as a vampire?!” But when the publicist sent me a copy, I couldn’t resist at least trying it because, after all, it’s a Janet Mullany book. 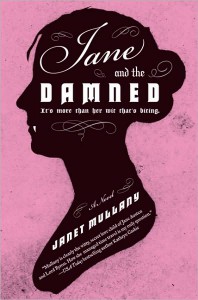 When Jane Austen and her sister Cassandra attend the Basingstoke Assembly Rooms, Jane never expects that one of the visiting Damned will dance with her, then flirt with her then, on a moment’s impulse, convert her. But changed to one of the Damned she is. Her only hope to undo what has been done is to take the waters at Bath so she, her parents and her sister journey there to the home of her aunt and uncle.

While at the Pump Room, Jane meets another vampire. To his horror, Luke Venning learns that Jane’s creator has abandoned her with no instructions. After allowing her to feed on his blood, he urges her to rethink her plans as attempting the change can be deadly but as a clergyman’s daughter Jane can’t imagine being doomed to hell should she be killed. As well, her ties to her human family are still strong.

All goes by the wayside, however, when the unthinkable occurs. After 700 plus years, England is invaded. The French begin to take the port towns then move inland, arriving at Bath and setting up a Republic. Jane realizes that as a vampire she will be able to answer the call to defend her country and thus begins her association with the Damned. As Jane learns more about her condition, is around those who accept her new status and begins to find love, her determination to try to revert is shaken. While the battle for Britain rages, what will Jane decide about the fate of her own soul?

In for a penny, in for a pound – while writing a paranormal in which a beloved English writer becomes a vampire, why not alter history a bit and allow the damned Frenchies to invade “This blessed plot, this earth, this realm, this England?” I will admit to being almost as shocked when the French troops arrived as were the citizens of Bath. England invaded? Unthinkable. But you do a marvelous job of portraying the unthinkable and seem to have relished the doing.

I’m no Austen expert so I will have to defer to those who are about how well you incorporate book quotes plus the known events and people of her life into the book. However, as this is also told as an alternate history story, exceptions have obviously been made.

The book begins with the style of sly humor I’ve come to expect from your writing. But later this ebbs away due to the serious nature of events portrayed. I can’t help but mourn this loss as this is something I look forward to while reading your books. Yet on the other hand, it would be hard to make some of the end scenes of the book funny and maintain the intense tone and tension.

I enjoyed the mix of proper young gentlewoman meets new existence as a vampire. It makes sense that in this world in which etiquette and social position are paramount, Jane would have to learn a whole new set of social rules. One must be proper at all times and if one is a vampire, one must be a properly behaved vampire. I also like how you make Jane be torn between the delights of her new existence and her dismay at losing her beloved family as well as her clergyman’s daughter’s despair at now being one of the Damned.

The outcome of the invasion ends the way I thought it would. Though the trip there meanders a touch and includes a whiff of the melodramatic. Jane see-saws back and forth about her options and in the end, though I can understand her final choice, it does underscore my main problem with the book. Why make Jane Austen become a vampire? Why not just have the main character be a young English gentlewoman?

And why have another important historical figure join her as one of the Damned? Given the reason he was changed, it doesn’t even make sense for this person to be in Bath and join the other Damned in their fight against the French. And as for Jane, though it’s amusing to imagine her with fangs, in the end I can’t help but feel it’s merely jumping on the Jane bandwagon and cashing in on the current popularity of all things Jane Austen-ish.

Ultimately, I find the book hard to grade. It’s well written, will amuse and entertain many and is certainly different from the usual follow up books written from the POV of the housekeeper at Pemberley. I read most of it in one day and wanted to know how the story would unfold. It kept my attention and I’m not sorry I read it. But I still have that initial question in my mind. “Why?”