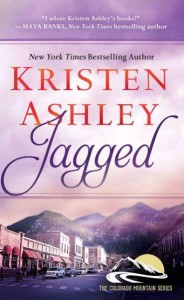 We rock, paper, scissored it to see who would write this review because neither and Kati nor I wanted to. We love your books. We both lost weeks this year reading your extensive, wonderful backlist. But while written in the same spirit as the other Colorado Mountain Man series Jagged was disappointing for both of us. Given that Kati wrote the last two, I shouldered this task.

Graham Reece or Ham, as he is called throughout the book much to my dismay, isn’t ready to settle down. He’s had a difficult past with women and resolved to love them and leave them. A harrowing experience with an ax wielding madman sends Ham back to Zara Cinders, a woman who has loved him in the past and to whom he has regularly returned. There is really one emotional conflict in this story and that is whether you should settle for someone even if you might love another.

As I ruminated about this book for a few weeks, I wondered if part of the challenge I had with this book is that the primary premise of previous Ashley novels is the existence of untameable men who are collared, in some sense, by a woman who they fall in love with. Ham is cut from the standard Kristen Ashley cloth but it seemed he longed for February Owens (heroine of For You). When she was reunited with her high school sweetheart, Ham was cut loose.

Zara loved Ham since she first met him and accepted his itinerant movement in and out of her life but she wanted a family and a permanent partner. Knowing that wasn’t Ham’s thing, Zara decided to marry someone else. Ham admitted he didn’t do relationships, couldn’t give her a happy ending, and wished her luck. When her relationship with her husband deteriorated to the point of divorce, Ham returned.  Conveniently that was about the same time that Feb gave him the boot.

The moral of Zara’s story was that she waited it out and got the love of her life. Don’t settle, seemed to be her storyline. But Ham’s story was that if you can’t be with the one you love, love the one you’re with. Even though I was supposed to see that Zara was Ham’s choice, it seemed like he was settling. He called February “beautiful” and Zara “cookie”.  Maybe we were supposed to see that a guy called Ham preferred edibles over all else, but him whispering to Feb and calling her and making sure she was okay even when she, oh, had a new husband and all just didn’t fit.

And Greg, Zara’s ex, seemed to really love her so no one really got what they wanted. Zara got Ham but not his whole person. Ham got Zara but he seemed to want Feb. In the heat of anger said to Zara “Only one woman I know not filled with poison, knew her own goddamned mind, her shit was fucked up but she didn’t make it anyone’s problem but her own, and I let her walk away from me, too. The difference with her and you, babe, is that I regret lettin’ her do it.”

Worse, Ham had a type.  Feb was “older than me, probably closer to Ham’s age. But she looked a little like me. Blonde hair.  Brown eyes.” And he flirted up a small busty blonde one night at the bar where he and Zara worked together. So it seemed like the women were interchangeable to Ham and if he couldn’t have Feb, at least he had a younger lookalike.

The story is told primarily from Zara’s point of view and I liked her quite a bit. She suffered a lot in her life, including an abusive childhood. She tried hard to stand up for herself, provide for herself but often ended up making poor decisions. I felt like Graham Reece was one of those poor decisions.

Also, I got the jagged reference the first couple of times, but it was used far far far too much in the story.  According to my Kindle search, it was used twenty four times to describe his voice and because it is such an evocative term about the fourth or fifth time, it became redundant and every time thereafter it lost any emotional impact. Redundancy in characters was also a slight problem. You’d be hard pressed to distinguish Graham from several other Ashley heroes.

There was a lack of urgency in the story. I remember reading one Kristen Ashley after the other. I literally could not stop reading them but this one I found it easy to abandon, in part because I really found the romance lackluster.

I wanted to like this more but Graham was both too similar a character to other Kristen Ashley heroes but without the devotion that makes up for his sometimes hurtful comments. While I liked Zara, I wanted her to have a different romance, one with someone who put her first in his heart, not just with his words.  C