REVIEW: Jacked Up by Erin McCarthy

When you published the first two Fast Track series books, I was enthralled. I loved the heroes and the intelligent, self sufficient heroines that you wrote. But subsequent books led me to fall out of love with the series, as I felt the heroines went from intelligent and self sufficient to bitchy and unlikeable. But when I heard that the latest installment in the series was going to be about Eve Monroe, sister to Elec and Evan Monroe who had previous books, I decided to request the book to see whether Eve’s story worked better for me. 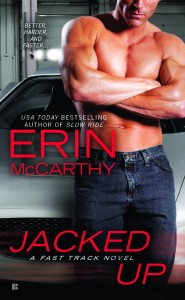 Eve handles PR for both of her brothers, and whatever they are paying her, it’s not enough. Through the last few books, she’s handled all sorts of PR nightmares. Since Eve never really wanted to do PR, she wanted to race cars, she finds her job extremely stressful. She deals with troubleshooting surprises constantly in her work life, so the result is that her personal life is regimented in the extreme. Eve doesn’t have a spontaneous bone in her body. So when Evan’s jack man, Nolan Ford begins flirting with her, she’s embarrassed and irritated. She knows full well that fishing off the company pier is not a good idea, and that when the inevitable happens, and the relationship ends badly (as all of her relationships do), she’ll have to deal with the daily stress of seeing Nolan. But then Nolan double-dog dares her to go out with him. Not one to ever walk away from a dare, no matter how ill advised it is, Eve accepts. She soon finds herself at a carnival disconcerted to be having fun with Nolan. Just as things become slightly heated between the two of them, Eve leaves. But Nolan is persistent. He’s attracted to Eve and he wants to know her better. Soon the two are dating, and Nolan is encouraging Eve to break out of her regimented shell and do things that make her happy. Eve is reluctantly having fun and enjoying her time with Nolan. They have amazing chemistry and she’s attracted to his easy going and adventurous spirit. For his part, Nolan loves spending time with Eve, and knows that he’s falling for her. So when the opportunity presents itself in Vegas, Eve and Nolan impulsively (and drunkenly) decide to get married. Eve begins to regret the action almost immediately, positive that Nolan doesn’t know her well enough to marry her. Will the two polar opposites find a way to make their marriage work?

There is a lot to like in this book. As always, you write erotic love scenes that are spicy and inventive. As a hero, Nolan is sweet natured and patient, putting up with Eve’s extreme A-type personality with kindness and care. The beginning of the book drew me in, particularly a somewhat “meet-cute” opening, although the two characters knew each other. That being said, I had my issues with the story as well. Nolan’s history could have been a little more fleshed out. His mother mentions that Nolan has had a number of impulsive relationships. Certainly, given the timeframe that the story takes place over, marrying Eve is what I’d characterize as impulsive. I’d have liked to have seen his impulsiveness explored further. How had those past actions informed his new relationship?  Eve is miserable in her job and seems to take a lot of issues out on Nolan, being needlessly mean sometimes. While we get enough of Eve’s inner monologue to understand that she almost always regrets her actions immediately, it doesn’t really excuse the way she treats him from time to time. Also, the couple declares their love for each other rather precipitously, which I found hard to believe, given how carefully Eve plans everything. My final gripe is that the ending was FAST! Almost as if you realized you were reaching your word count and needed to rush to give the Happily Ever After, which I found dissatisfying.

Overall, there were several things that I liked about Jacked Up, including the sweet hero, but I felt that the story could have been stronger and more fleshed out. Jacked Up gets a C from me.

→ Kati
Previous article: REVIEW: Fever Cure by Phillipa Ashley
Next Post: What Janine is Reading — April and May 2012