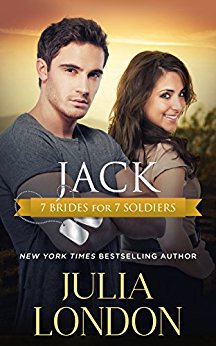 I had great success with two of your books last year (Suddenly Engaged and Suddenly in Love – I’m saving Suddenly Dating for a rainy day) so I bought Jack hoping for a similar experience. Jack is book 5 in a multi-author series about “7 Brides for 7 Soldiers”. All from Eagle’s Ridge in Washington State, the 7 guys went to school together and after they grew up, joined the military. I haven’t bought all of the books in the series yet and the ones I did buy are on my TBR still apart from this one. The stories stand alone well enough I believe. The other soldiers appear in this book in one way or another but their cameos aren’t intrusive and I didn’t lead to any confusion for me.

Jack Carter is a marine who served two deployments in Afghanistan. He was wounded in the leg after a suicide bomber detonated explosives in a marketplace, killing many soldiers and civilians. He now walks with a slight limp but the wound to his psyche is more severe than his physical injuries. After he came home, he gradually became more and more anxious about being in strange spaces, open spaces, crowds, near strangers – until he became all but a shut-in in his Seattle apartment. He has a therapy dog, Buster, who helps him with panic attacks but he hires a dog-walker for him. He even has Skype sessions with his therapist because he’s unable to leave his home. He manages to take Buster out to the courtyard to do his business and every now and then he makes it to the coffee shop on the corner – usually at ridiculous o’clock in the morning so that there won’t be many people around. He refuses to take the medication his therapist prescribed because of his fears about the potential side effects. One of his buddies committed suicide after taking some of these medications.

Jack works as a freelance journalist and mainly posts articles to an online military newspaper. He’s working on a story about the clinic which prescribed the drugs to his friend who committed suicide because there are some discrepancies in the appointments. Jack believes the clinic is taking government money for appointments which never happen and in the meantime, leaving vets out in the cold when it comes to medical care. (To be honest, I was a little unclear on how Jack made enough money to live on when he didn’t leave his apartment. In the time the story takes place, he’s only working on this one story. I expect he has a military pension as well but I’d have liked a little more detail about how he managed to get enough work to finance himself, all without leaving home.)

Jack also has a service – Dinner Magic – come in to cook for him 3 nights a week. Whitney Baldwin is working for Dinner Magic while trying to find the perfect location for her bakery. Her family is full of professional people – lawyers and doctors – and were disappointed when Whitney revealed her dream was to bake. She moved from California to Seattle in part because her research indicated it was a good market for her baked goods and also because it was far away from her family’s judgement. The Dinner Magic model is a combination of a “Blue Apron” type service with a personal chef (although most of the cooks aren’t actually chefs). Jack selects what he wants from a menu, Whitney purchases the products fresh on the way to his apartment, there she cooks it for him and plates it up nicely, putting a second serving in a container for him to eat another day. Jack has the same 3 things every week. Whitney is bored cooking it and can’t imagine Jack isn’t bored eating it but it’s what he pays for so it’s what he gets. She’s never met him. He left her a note asking her to put his dinner in the fridge the first time. Sometimes he calls out to her from the back of the apartment. It’s fair to say her mental picture of the reclusive Jack does not fit the reality when they finally do meet.

Slowly and in the confines of his apartment, they get to know one another. Then they jump into bed and have lots of sex. If that seems sudden it’s because it was. In the book they moved from getting-to-know-you small talk, with a lot of off page conversation (unfortunately) and then they kiss. Next thing, they’re in bed. It was fast.

Jack doesn’t tell Whitney about his PTSD. He’s humiliated and ashamed by it. He doesn’t like admitting it to anyone. His sister and his therapist, the only ones he’s confided in.

Whitney is bright and smart and talented. I struggled a little because she didn’t put together all the clues about Jack’s PTSD. It was pretty obvious he didn’t leave the apartment. She knows he’s a veteran. She can see he has a limp. He’s been open with her about his military service. He gets sweaty and anxious at the thought of leaving the apartment. He deflects and makes excuses not to go places. I found it unbelievable that she wouldn’t guess. Even the doorman at Jack’s apartment complex guessed what was going on.

However, eventually, Whitney does find out about Jack’s PTSD. She offers to help him get better but expects he will actively work with her on it otherwise she is out. She doesn’t mind investing in him but he has to want this too. I didn’t see her doing a lot of research about it and I felt that her expectations for him were a little high, all things considered but Jack does improve and each improvement is a solid foundation for the next step. I’ll note here that it’s not Whitney who does the fixing. Jack works with his therapist and makes the important decision to take the medication he’s been prescribed as well as the “exposure therapy” he has with Whitney.

The pacing felt off to me. On my reader, the story was 160-ish pages long, so about a category length. It could easily have been a full length novel and I think if it had’ve come in at the 250-300 page mark, a lot of the things which bothered me would have disappeared. I mentioned above that there were some unfortunately off-page conversations. In many ways, they were at the heart of the courtship between Whitney and Jack and they were summarised in a paragraph or two. I’d have liked a lot more dialogue, to see them interact together more. Jack came across to me as quite disabled by his PTSD at the beginning of the book but it’s apparent that these conversations were the usual kinds of discussions which happen when people are beginning a relationship.

What had seemed impossible to him a few weeks ago was now truth—he trusted Whitney, trusted someone new in his life. It had been so long since Jack had been able to trust anything. He’d told her about growing up in Eagle’s Ridge, about his best friends, and the things they used to do. How he’d gone into the Marines after college, wanting a greater purpose, wanting to serve in some way.

Perhaps if I’d seen those I’d have been more sympathetic to Whitney’s lack of awareness about Jack’s anxiety condition.

Also, Jack’s recovery felt super fast as well. Recovery from illness is often non-linear. I expect a two-steps-forward-one-step-back thing, with maybe a sidestep here and there is more the norm but Jack’s recovery, once he takes his medication and agrees to let Whitney help, was all one way. To truly do the storyline justice I think there needed to be more time spent with Jack in the recovery phase. Or, if not that, then perhaps a period of separation for the couple while he worked with his therapist over a period of a few months, before their HEA.

Whitney had her own journey as well, trying to situate her bakery and get her business started. There wasn’t time to really cover this well. I felt like there was a deeper story there too.

I liked Whitney and Jack and I liked them together but the set up took a little too long and the rest of the book felt rushed and as a result the ambition of the book wasn’t quite fulfilled. I enjoyed it well enough but I think a longer page count would have made a big difference.