REVIEW: Inked Ever After by Elle Aycart

It may have been a mistake for me to read this because while I had read a previous book in this series (Heavy Issues) it was not the book featuring the main couple in “Inked Ever After.” Thus I was lost. “Inked Ever After”, I learned after some research, is actually the sequel to “More than Meets the Ink.” (But in my defense, More than Meets the Ink was published in 2011 and Heavy Issues in 2012) 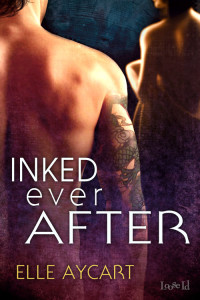 “Inked Ever After” is really an extended epilogue of “More than Meets the Ink” and it follows James and Tate from bachelorette party to pre wedding jitters. Romances featuring established couples are kind of fun and while there is a whisper of a plot in this book, the story is heavy on the sex and light on everything else.

Tate is suffering emotionally from the loss of her father and her brother. She’s set to marry James, her love, but is racked with insecurity. She believes she isn’t good enough for him. I didn’t really understand why Tate doesn’t get to be an emotional mess close to her wedding and thinking about her dead father and brother. Or why she thinks this makes her an unacceptable partner to James.

I liked the idea of exploring a relationship that is being held together by not much more than mutual orgasms because that’s kind of an interesting conflict but all their conflicts are reduced to physical resolution. Seeking a cure from the diseased well doesn’t make a lot of sense. I know that James tries to justify this by saying “You always let me totally in when we have sex. No reservations. No fears. I get all of you. When I’m inside you, all your walls crumble, even the ones you don’t know you have.” But he also knows that Tate uses his fierce desire for her to avoid any heavy talking.

Sure, it means there are more sexy times in a book but how many scenes of sexy times does one reader need until her sexy time receptor becomes numb? The sexy times are hot. James is a dirty talker but he kind of is an overbearing dirty talker and Tate was too beat down at times for me to enjoy James’ constant commands. The ending, however, was very sweet and I wished that there had been more of those non sexual emotional moments in the book. Maybe if I had read the first book, this one would have been more enjoyable. Alas, I still think my sexy times receptor would be numb. Worn out. Overused. C