REVIEW: India Black and the Widow of Windsor by Carol K. Carr

I read your debut novel, India Black, earlier this year and enjoyed it a great deal. While I can see why some people would be put off by the voice, I adored the protagonist, a brothel-madam-turned-reluctant-spy, and her unrelenting cynicism and jaded pragmatism. It was refreshing. Combined with a caper sensibility, it was one of my favorite books last year. So I was very excited when Jane sent me a copy of the sequel. Unfortunately, it didn’t quite live up to my expectations. 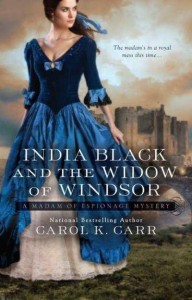 After the events of the previous novel, India Black has gone back to her life as the proprietor of a brothel. But her life has suddenly become boring. I suppose that’s understandable. When you’ve grappled with Russian spies, trying to satisfy your employees’ desire for new dresses is probably not on the same level. So when British spy French recruits her for a new mission, India jumps at the chance.

The mission is a tricky one. Queen Victoria is fond of seances because she believes it allows her to communicate with her dearly departed husband, Prince Albert. At one such seance, she was “told” by her husband to spend Christmas at their Scottish home. Prime Minister Disraeli believes it’s a Scottish Nationalist plot to assassinate the Queen, and it’s up to India and French to stop it from happening.

I’ll be the first to admit that British history is not my strong point. That said, I have a feeling these portrayals of Queen Victoria, John Brown and various other historical personages are perhaps not so flattering. I’d be interested to see what other, more informed readers think of these depictions and how they compare against the historical reality.

As for the book itself, one of the reasons why I loved the first novel was because it was a caper story. I’m a big fan of caper stories and their structure. So I admit I was expecting more of that. Unfortunately, barely any of that was here. Instead, The Widow of Windsor opted for a more amateur sleuth approach. There’s nothing wrong with that, but it’s not particular narrative style that engages me. Straight mysteries are generally not my genre.

Because of the shift from spy caper to amateur sleuth, I think India’s character suffered. I thought we saw very little of India’s resourcefulness and cleverness. In fact, I often thought she was outmaneuvered and outwitted by everyone around her. And in the end, she comes off as being slow on the uptake and unobservant. I didn’t like that at all. In the first book, we were introduced to a larger than life character and I felt that this book, as Jane said, diminished her.

But it wasn’t all bad. I did like India’s relationship with the Marchioness, for whom she was posing as a maid. There’s definitely more to that old woman than meets the eye and I’m not convinced her entire ridiculously eccentric personality wasn’t a complete fabrication. I am doubly curious now, given her remarks about India’s mother.

Speaking of which, I am dying to know India’s background. We got hints of it in the first book, and we get more of it here. By this point, I am extremely curious as to how a woman like India became a prostitute, even more so considering the hints the Marchioness dropped about her mother.

The great irony of this novel is that one of the underlying themes is not to underestimate women. It comes up again and again throughout the narrative. Normally, I like that message because fiction could stand to be more populated by great women characters. But I thought it was undermined by India’s ineffective sleuthing that often lands her in trouble and makes her look incompetent. While I understand it’s unbelievable to make India a rock star at investigation, a little less bumbling around and getting lost would have been nice.

Like the first book, India Black and the Widow of Windsor retains its comedic undertones but it never quite matches the satisfying over the top qualities. I wasn’t thrilled by India’s portrayal as a character, and I thought the ending was somewhat anti-climatic. I can only hope she fares better in the next installment. C