REVIEW: How Sweet It Is by Sophie Gunn

The hook for this story is that there are four women who were enemies as high school students and are now best friends. They’ve formed an alliance called the “Enemy Club”. I have to admit an aversion to any group of women outside of college who form and name their own clubs and it was the references to the “Enemy Club” and the attempts to set up interest in further books that was the weakest component of the story. The Enemy Club had nothing to do with the character arcs of the main protagonists or with the development of the plot. 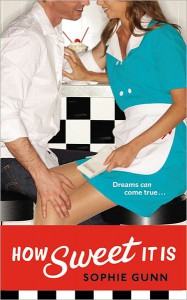 The main thrust of this story is about guilt and acceptance and the failure of money to solve anything. The main and secondary characters struggle with these concepts in different ways. Brooklyn property owner and male protagonist, Dante “Tay” Giovanni, ran a red light one day, killing the other driver. He was charged with vehicular manslaughter but a grand jury didn’t indict him. Felled by guilt, Tay begins a downward spiral of depression which leads him to lose his fiance, sell all his belongings and search out the daughter of the killed driver. Tay seeks absolution and believes that this daughter is the only one who can grant this. He plans to give the daughter his newly liquidated assets as he has discovered that the dead driver has left her daughter with a river of debt (I’ve never really understood this plot device as most unsecured debt is discharged by death, but alas).

The daughter doesn’t want Tay’s “blood money” and so Tay is stuck, without funds, burdened by guilt, and desperate to help someone. Tay fixates on Lizzie Bea Carpenter, a waitress struggling as a single parent to her 14 year old daughter, Paige. Lizzie and Paige have been getting along fairly well, as well as most teen girls and their mothers get along, when Paige receives a mailing from her birth father that he would like to reconnect with Paige. The letter is sent on expensive paper and postmarked Geneva, Switzerland. This stirs up dreams in Paige’s mind of taking her snowboarding career to the next level by moving to Switzerland with her father who must have money, unlike her mom.

Lizzie’s house is pretty run down and she’s often turning to her brother in law and former high school flame to help out. When Tay hears about Lizzie’s need for a handyman, he begins to do work around her home when she is gone, kind of like the elves working for the shoemaker. Soon, though, Lizzie figures out what is going on and Tay and Lizzie develop a romance. However, Tay doesn’t believe he deserves happiness and Lizzie’s in an emotional tailspin over possibly losing her daughter.

A secondary storyline concerns Lizzie’s sister, Annie, who is suffering some post partum depression which has aggravated her insecurities about her husband, Tommy’s, feelings toward her. Tommy and Lizzie were highschool sweethearts and then Lizzie broke up with Tommy for Paige’s father (who then ran off). When Tommy and Lizzie were broken up, Annie swooped in and captured the wounded Tommy’s heart. Over the years, Tommy has always been there for Lizzie and Paige, making Annie feel like she stole Tommy and that Tommy regrets committing himself to her.

Still another part of the story is committed to Candy, the daughter of the woman killed by Tay’s vehicle. She’s broke, angry, and scared college student who she believes she only has herself to rely upon. In truth, she has her own complicated feelings of guilt and acceptance to work through.

While the characters’ lives intertwine with each other, their paths to fulfillment and happiness are essentially the same. Accept the wrongs you committed but don’t let guilt and grief ruin your life.

I thought Tay’s storyline was the best done. What happened to Tay could happen to anyone. It’s one of those “but for the Grace of God go I” occurrences (insert your own diety here). I thought his struggle with grief and self hate presented authentically although I did wonder whether his emotional trauma would have ever been healed. I also thought that presenting the killed driver, Linda, as a less than likeable character was too easy to get the reader to consent to Tay’s forgiveness.

Unfortunately, about the only thing I found compelling was Tay’s drama. It was unusual and not one I’ve read in romance. I really appreciated that this book took on such a challenging topic, but overall I found that the characters lacked sparkle. There was a certainty monotony in tone to the story: Tay could not get past his guilt. Lizzie’s money problems were wearing her down. Paige wanted to run off with her absent father. Candy was pregnant, destitute and alone. Annie was depressed and lying to her husband. Perhaps if the prose had been more lyrical, there had been more movement in the tone, or the other secondary characters more compelling, it would have been a book that would have resonated more. Tay’s dilemma was one that I thought a lot about after reading the book but I think it was less because of the way Tay was presented and more of the dilemma itself. C