I fear my epic reading muscles must be atrophied. I realize I’ve been reading many young adult novels and paranormal/urban fantasies in recent months, but I think it’s warped my expectations for how long it should take me to finish a book! I’ve reviewed the Elantra novels you write under the Michelle Sagara name here on Dear Author in the past, but I think this is the first time I’ve reviewed one of your Michelle West epic fantasies. 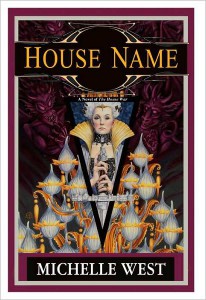 For readers who are only familiar with the Elantra novels, Michelle West also writes interconnected fantasy series for DAW. The best analogy I can come up is something like Mercedes Lackey’s Valdemar universe. The various novels chronicle the struggles of different characters against the backdrop of the God of Hell returning to the mortal plane, thus promising impending doom and the apocalypse.

House Name is the third book of House War, the third series set in this universe. This series focuses on Jewel Markess ATerafin, a major character of this universe, and her rise to influence in the most powerful noble house of the Essalieyan Empire, House Terafin. House Name picks up after the events of City of Night, in which Jewel’s mentor sends her to his estranged sister, Amarais, the lord of House Terafin.

Coming from one of the poorest districts in the Capital, Jewel is the den leader of a motley gang of street urchins. She is also seerborn which, for obvious reasons, is a very coveted and very rare talent. Because of this, Amarais sees her potential and has given her the opportunity to earn the name of House Terafin. The noble houses of the Empire are unique in fantasylandia in that you aren’t born to the name. You earn it.

What does Jewel have to do to earn the name? Oh, nothing much. She just has to find the entrances to the ruined underground city that exists beneath the Capital. For years, Jewel and her den scavenged the city for valuable items they could pawn. But recently, the ruined city grew unstable. Worse still, something else was in the city, something that led to the disappearance of three of her den and the death of her right hand.

You see, once upon a time, that fallen city was home to the Lord of Hell and his followers when gods still walked the earth. The problem? The entrances are disappearing. This is obviously a problem when demons have returned to the mortal plane and are trying to resurrect their god. Even more, it makes Jewel look like a liar. The only reason she’s believed is because Amarais and the powerful mage, Meralonne, saw the existence of demons with their very own eyes.

If this plot sounds familiar, that’s because it is. It’s the events of Hunter’s Death, a previous Michelle West novel, told from the den’s perspective. As a longtime Michelle West fan who’s read every book, I must admit that what should have been the high points of the plot ended up not being the case at all. I knew what was going to happen, and that negated the suspense.

I can’t say this was a surprise. After all, the last third or so of the previous novel, City of Night also repeated some of the events portrayed in Hunter’s Death. But it didn’t bother me quite as much there because we had the first two-thirds and Rath’s and Duster’s respective storylines. House Name, however, expands the remaining events involving the den from Hunter’s Death. A lot. To the point that I question if this book was even necessary to advance or just pretty filler.

Don’t get me wrong. I did like some of the expansion. I enjoyed Finch’s and Teller’s storylines a great deal. I also liked seeing the conclusion of Angel’s plot thread that began in City of Night, even though I felt that it lacked a certain impact. There were also some background details offered up that I think longtime readers will appreciate.

That said, I know this story already. I know how it ended. This isn’t a matter of knowing genre conventions — like the lost heir returning to claim the throne or the evil king being overthrown. Readers know those by heart. Like many readers, I read for the journey. But I’ve already been on this journey. I know the setbacks, the advances, the success, the failures. I know them already. A few minor subplots and expanded scenes aren’t going to change that fact.

I guess what it comes down to is why readers read a book, and why epic fantasy readers read epic fantasy series. Speaking for myself, I look for new adventures, new struggles, new conflicts, new mysteries, forward movement along a character arc, and maybe new characters. Maybe not at all once but certainly some of them. And to be blunt, I don’t think House Name actually gave me any of those things.

This is a tough grade to assign. It’s a well-written book and I think someone who hasn’t read the Sacred Hunt duology (of which Hunter’s Death is the second book) might not view it as much of a retread as I did. On the other hand, because it portrays the events of that book from the den’s perspective, unfamiliar readers might also feel like half the story is missing. I do think this is a book diehard fans of the series will want to read but readers who are lukewarm towards Jewel and her story arc can probably skip it. At any rate, this novel is anything but a good entry point into this universe, although that is a problem plaguing many an epic fantasy series and certainly is not unique to this one. C

There appears to be no ebook format for this book. I know. WTF?