This book faltered in the beginning for me and never recovered. The female protagonist is Sue Ann, and in the previous books, Sue Ann has appeared happily married to Jeffrey. At some point between book 3 and book 4, Jeffrey fell in love with another woman and confesses his feelings for this woman to Sue Ann. Sue Ann is devastated by Jeffrey’s emotional infidelity and they ultimately divorce. Sue Ann’s emotional wounds are furthered by seeing Jeffrey swanning about town with his new love who isn’t even younger or more beautiful than Sue Ann. 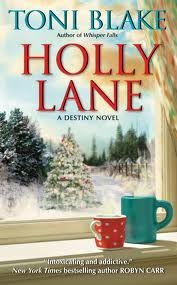 Sue Ann runs to an isolated cabin and there she ends up with Adam Becker, the male protagonist in the book. As if there is some romance code that all main protagonists who find themselves alone must immediately copulate, Adam and Sue Ann fall upon each other.

Interestingly, Adam admits that his wife left him because of his cheating. Sue Ann excuses his actions because his wife, according to Adam, had disparaged his manhood, and so one lonnely night, Adam succummbed to the advances of another woman. He only kisses her, though.

The focus on the book, though, is that everyone isn’t what they look like on the outside. From the outside, Sue Ann and Jeffrey’s marriage looked perfect and happy. Even Sue Ann thought she had a good marriage until she confronted Jeffrey about being distant. Adam is the town nice guy. He’s the image of the All American Boy Next Door. But he’s been unfaithful. He’s portrayed as short tempered. He has a difficult relationship with his ex wife and he misses his sons.

Again, this is an interesting concept yet I felt like little was done to explore it. In the end, there are no surprises. Jeffrey becomes villanous, I suppose in an effort to elevate the romance between Adam and Sue Ann as being truer and more ever lasting than any romance that the other shared with someone else previously.

The concepts and conflicts presented in this book were brought up and then discarded without much inspection. This could not have been exemplified more than by the first sex scene beetween Adam and Sue Ann. Neither of them looked at the other with any sexual interest previous to their cabin share. It’s a thoughtless action and didn’t read as if it was passion fueled. There seemed plenty of internal monologue going on, rather that two people who lost their heads in an impulsive action. I.e, right before they jump each other, Sue Ann thinks:

Not that she could really think of Adam in a sexual way. He’d been her friend for too long and she wasn’t wired to make that sort of switch.

Sue Ann’s conflicts consist primarily of her thinking about how sexy Adam is despite the fact that she has to enter the work force for the first time in years and must make a living wage for herself and her daughter. In sum, she has greater worries (or should have) than thinking about how sexy some guy is. That the majority of her internal monologue is given over to whether she can withstand Adam’s sexiness is a bit of a head scratcher.

Oh my God, I’m alone with Adam again. But that was okay, she told herself. You’re strong, you’re capable, and everything’s going to be fine. After all, it was a twenty minute ride back to Destiny, not wild monkey sex.

At this, though, Adam unexpectedly cast another of those slightly sheepish—albeit very sexy—looks. “Not really. If you’d been around me an hour before I delivered your tree today, you’d have run for cover.”

Get out of the truck. You have to. You can’t afford to risk your heart again this soon—you just can’t. Sure, you can tell yourself it’s just sex, but there’s really no such thing as that. Sex comes with emotions—deep ones you can’t push away.

It’s not like he’s asking you to wear his class ring and letterman jacket, for God’s sake. This is sex. Good sex. Pure and simple. Why shouldn’t you let yourself have that? “I want that,” she heard herself murmur.

I’ve had sex now. Twice. I have a life again. Sort of, anyway. And maybe that was part of what took the edge off seeing Jeff tonight. Still, that sex was fraught with so many mixed emotions that she could barely keep up with the constant push/pull of it in her own mind. In some ways, she still wished she could let herself trust in Adam and consider letting this thing with him go somewhere.

Maybe this book was about Sue Ann’s sexual awakening, but it seemed set up as Sue Ann becoming independent after her divorce. Instead of creating an independent woman I found her to be sex obssessed, more focused on wondering whether she should sleep with Adam than creating a life that was separate from a man.

Sue Ann and Adam do have interesting discussions on how they failed in their own marriages and agree that marriage is a work in progress where both parties have to be committed to making it work. Although I did think that this exchange between the two exemplified their relationship:

“I’d be happy to be your fix-it man, Sue Ann,” he told her smoothly, his voice going a bit deeper, his eyes once again making her feel as if he’d actually reached out to touch her—and she felt that invisible touch everywhere. Whoa.

Maybe the focus on Sue Ann’s physical feelings toward Adam would have been more appealing had she already established a life separate from her former husband. Instead, I felt the setup of “on my goodness, I’m on my own” didn’t match up with the ending which was “I’m afraid to fall in love again.” Mostly, though, I found the internal monologue dull and I had a hard time maintaining my interest. What readers may enjoy is the small town setting and the ordinary person feel. No billionaires here and no crazy hijinks that require suspension of disbelief. The rediscovery of love after a failed attempt is also an enjoyable storyline. It didn’t work for me, though. C