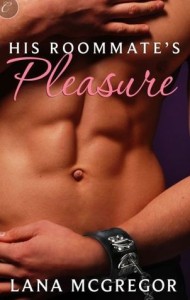 The gist of it is that Adam and Josh have been roommates at university for some time. Adam was considered a nerd in high school for being the out-and-proud gay kid. Josh, who went to a different high school, was the obvious jock. Their lives in college aren’t that much different. Adam studies a lot and hangs out with two very good friends; Josh hangs out with guys on his sports teams, playing video games together and going to keggers like it’s their last day to live. They’ve never been close roommates, but they are comfortable enough with each other to respect boundaries. That is until Adam stumbles across something on Josh’s computer during an emergency essay submission.

Awkwardness seems to melt into eroticism as Josh admits that he’s gay and that BDSM turns him on. Adam’s own excitement over the idea of submitting ignites something in Josh that has him asking if Adam would like to explore some of the things in the photographs. Slowly; not as if they are dating, but just to explore a mutual sexual interest. At the first command, Adam finds himself kneeling next to Josh and wanting to be the guy wearing the blindfold and the collar. His college roommate survey never asked the question if he was dominant or submissive – now, Adam finds himself well-matched. When Josh begins to seem less of a fuck buddy and more of a boyfriend, Adam can’t help but worry that things will take a turn for the worse even as their sex lives get hotter and hotter.

Out of the two roommates, Adam is more along the lines of a focus character. His impressions of jocks from high school have him detesting those kinds of people, yet he realizes that Josh is a complex individual and find his dominance sexually stimulating. I found that Adam’s character gave up his trust to Josh very easily; it felt like there wasn’t a lot of resistance or concern over that aspect of the D/s relationship between them. Even if it’s sexual and both people consent, there’s a lot of psychological reasoning as to why someone would want to give up that control, and I didn’t really get a sense as to why Adam felt the need to do that. Was it because of his being bullied? Was it because he enjoyed his stereotypical “nerd” role to some degree? That part of Adam’s character never felt explained to me, and I had trouble picturing Adam being so gung-ho about his desire to be the submissive as a result of it.

Josh is kind of in the same boat. We learn less about him save for the fact that he likes sports and has a soft, slightly nerd-y side with his choice of favorite films. Aside from that, we learn about him being in the closet and being into a dominant in sex. Both he and Adam have very little sexual experience, so the engine running their relationship for a majority of the book is their discovery of this D/s sexual relationship. It’s very slow going – no anal penetration until the end of the novella – but does signify some degree of increasing trust and affection between the two boys. Yet, we are still met with a character that doesn’t get delved into a lot psychologically. I never felt like I knew a lot about what made Josh tick in terms of his kink, and, while kinky sex doesn’t need to be an everyday occurrence, it’s obvious that these two characters find a lot of solace in the D/s sexual relationship. The sex felt very cut-and-dry in its progression because of the lack of emotional depth of the characters’ sexual psyches.

There were some aspects of this story that really did work for me. McGregor’s side characters were very realistic. I could believe the varied responses from Josh’s friends RE: his sexuality, yet I was simultaneously troubled by how Josh ignored Adam’s discomfort with jocks due to his past bullying experiences. Yes, not every jock is a bully, but several of Josh’s friends displayed problematic behavior, hence why Josh was afraid to come out to them. I did appreciate one character, Nate, who is actually likable because he respects women and gay people despite his ingrained societal preconceptions. That part of the story was well-addressed. I also enjoyed Adam’s two close friends – both PoC characters that I would have liked to read more about.