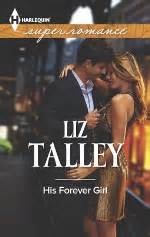 I had been meaning to try one of your books for a while, so when this one came up in the author promo thread, I decided to take the opportunity. I’m going to use your comment from the thread, since that is what got my attention in the first place: “It’s Mardi Gras, and this story revolves around rival Mardi Gras companies. It’s girl meets boy, girl falls for boy, boy steals her job…and that’s where the fun starts. All set in fabulous New Orleans!”

This is a bit misleading, however. For one thing, His Forever Girl is more serious than your description suggests (it’s also not set during Mardi Gras). In addition, Graham doesn’t set out to steal Tess’s job, and it’s not really her job, either: the book begins with the two of them hooking up while Graham is in town for a job interview, then shifts one month later when the new job turns out to be replacing Tess’s father as the CEO of the family firm, which builds Mardi Gras floats. Neither of them knew that Graham had interviewed at Tess’s company.

Tess is a designer and VP of operations, and expected to be promoted to CEO herself some day. She’s extremely upset that to be blindsided by the announcement of a new CEO and that her father did not consider her for the position. Added to that, Graham never called her after their night together, even after she’d left him a message about how she felt. It is true that she sees it as job-stealing by Graham, but she’s more upset with her father in this regard. Tess decides that she needs to find a new job where she can prove herself and maybe seek a bit of revenge as well, and ends up taking a position with a rival company. And not just any rival company, but one originally founded by Graham and his then-fiancée, Monique. Graham and Monique have a daughter together, but their relationship ended badly and he moved to Houston. He’s now back in New Orleans to start over and play a greater role in the life of their seven year old daughter, Emily.

I’ll be honest: Tess’s reaction to Graham’s hiring struck me as very immature. Her being upset made sense, but believing the worst of all involved, flinging accusations, quitting on the spot and immediately going to work for the competition seemed childish and not in line with the way Tess came across in the prologue. In addition, Monique’s stated reason for hiring Tess is that she wants her to bring in some of the accounts she had at her old job – so basically, Tess is not just working for a competition but is also in a position of really hurting her family’s business. I think I’d have had an easier time with the plot if Tess and Graham were at rival companies to begin with, or if they had both ended up at the same firm, rather than having this sort of conflict. For her to end up working for Graham’s ex-wife seemed over the top and even Tess thinks at one point that she’s in a soap opera.

Some of His Forever Girl is told from the POV of Tess’s father Frank. Early on, he finds out that he has cancer and that his prognosis is poor, but rather than telling his children, or explaining to Tess why he feels that she is not yet ready to take over the company, he keeps secrets from his family and his daughter and is then surprised when things turn out as they do. Graham seemed to me unlucky to be caught in the middle of this, because other than not calling Tess back, he was a pretty decent guy. The characterization of his ex Monique, however, was an issue for me. She’s openly ambitious, which I liked, but is also portrayed as selfish, manipulative, extremely ego-driven and uncaring of others, including her own daughter. I didn’t feel that her character needed to be so villainous for the story to work.

On the positive side, I did keep turning the pages, and I liked the setting and the details about Tess and Graham’s work – both of them are involved in designing and building floats, Graham coming from an engineering background and Tess as an industrial designer. I’m pretty sure this is the first time that I’ve come across this business in any novel, and I thought you did a good job in making it a part of the story and showing why Tess and Graham enjoyed their work. I also liked Graham’s efforts to rebuild his relationship with his daughter, and enjoyed some of Tess’s family. I appreciate that you wrote a happy ending without having everything turn out miraculously well for everyone.

One other thing that I want to point out is that quite a bit of the action takes place offstage. When Tess and Graham first hook up, the sex was pretty much fade to black and I ended up checking that this was indeed a Superromance, because I thought it might be one of the subtle/sweet lines. Once Tess has her job interview, the story jumps forward – we don’t get to see her family’s reaction to it or her first weeks at her new job (or Graham’s, for that matter). I would have liked to see more of the action actually happen and to see more of Tess and Graham actually interacting with each other, preferably in place of some of the longer conversations and internal monologues, or the other POVs. It was clear that Tess and Graham were attracted to each other and enjoyed being together, but there wasn’t enough there for me to believe that they had truly fallen in love.

Ultimately, I did like some aspects of His Forever Girl, but not quite enough to overcome my issues with it. A stronger focus on the relationship and the action would have been nice, as well as more reasonable behavior from some of the protagonists. As it is, my grade is a C.