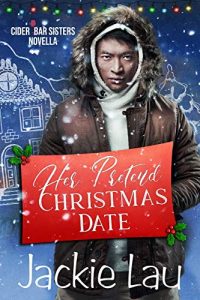 She’s home for the holidays with her starchy fake boyfriend…

Although she’s the fun and outgoing one, Julie Tam has always lived in the shadow of her older sister, Charlotte. Now Charlotte has a good career and a great boyfriend whom their parents love, and Julie has neither of those things.

Her blind date with Tom Yeung is disastrous; however, he’s exactly the sort of guy her parents would like—a methodical, strait-laced pharmacist who even folds his underwear and wears paisley ties. So, she pretends they’re a couple to impress Mom and Dad in their phone conversations. When her mother insists that Julie bring Tom to her hometown for Christmas, Tom, who has no plans for the holidays, agrees.

But Julie doesn’t know how she’ll tolerate a whole weekend in his company, especially when they have to share a bed and participate in a gingerbread house competition together. The man is irritatingly proper and set in his ways.

Except after hours of baking and skating and opening presents, she’s starting to find Tom annoyingly attractive and even endearing. And now, she doesn’t want this holiday weekend to end…

Despite this being part of the “Cider Sisters” series, I feel it can be read out of order. I haven’t read the first two stories but have read the third one and did fine just picking this one up now due to the Christmas aspect. Sadly though, while I liked parts of it, overall it just never quite jelled for me.

Tom Yeung is a pharmacist who wears a (paisley) tie to a casual first date dinner which Julie Tam finds horrible. Tom is slightly annoyed with Julie for being late and not thrilled with the restaurant choice. In fact, almost everything about the other sets them off and both agree they don’t want to prolong this date or have another. But Julie is tired of being the daughter who her parents fuss at because of her job and life choices so she tells her mom she’s dating someone she knows they’ll adore. Of course this backfires when they want him to show up at the family Christmas but surprisingly Tom and Julie end up getting to know each other better and decide to make it real. After the story being dragged out for two chapters too long, their opposites attract seems to be a go.

I found I liked thoughtful Tom a lot more than free spirited, and sometimes rude, Julie whose dominant character trait is being contrary just because. Seriously, she finds herself doing things she knows will agitate him or chooses to try and rile Tom just to annoy him. Once or twice – okay. Over and over makes her seem childish and petty. I do realize why Julie is acting out because of parental pressure but there wasn’t enough time to set that up and make me like her in spite of her actions. But then they click over other things and enjoy time together. Still the scenes of them jumping each other like the plane is going down are sudden and not something I bought into. It just felt awkward and forced.

There are a few home truths brought out for Julie and her parents to face. However once that happened (and points for having Julie realize that lying to her parents about this wasn’t right and for her parents to start to think about the expectations they put on her), I did get behind them wanting to try the relationship a second time and explore where it might lead. Overall though, this one was just lukewarm for me. C

→ Jayne
Previous article: REVIEW: Counting Down with You by Tashie Bhuiyan
Next Post: REVIEW: Safety Protocols for Human Holidays by Angel Martinez