I had been wanting to read Hello Kitty Must Die for a while, and when I found out it was free at the Amazon Kindle store, I enthusiastically acquired and read it. In some ways, it was precisely what I expected: a dark, biting, satirical revenge fantasy. In other ways, though, it was both more and less than I expected. More in its twisted amorality, which was a refreshing change from so many heavy-handed moralistic crime stories. And less in the way I felt it failed to challenge many of the stereotypes it attempted to satirize. 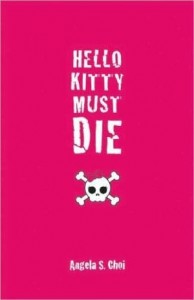 Fiona Yu is a twenty-eight year old, Yale-educated law associate at a prestigious corporate firm in San Francisco. While she makes a six figure salary, she still lives with her Chinese parents, who own a Laundromat and continually set up their single daughter with an increasingly unappealing array of unmarried Chinese men, hoping to marry her off as soon as possible.

Contrary to her parents’ wishes, Fiona does not wish to marry or have children, and while she doesn’t particularly love practicing law, she does enjoy the myriad designer shoes and handbags she can buy. Despite the fact that she has no intention of letting any of the men her parents set her up with get past first base with her, Fiona is horrified to find out that she seems to have been born without a hymen. So horrified, in fact, that she decides to consult a vaginal reconstruction surgeon, who will charge her a mere $2500 for a new hymen.

Except that when the doctor steps into the examining room, he turns out to be one of Fiona’s best friends from Catholic school, a boy who taught Fiona how to stand up for herself to bullies and who was himself sent away when he set one girl’s hair aflame after she told everyone Sean was gay because he didn’t want to kiss her. Sean wasn’t gay; he just didn’t like hypersexualized females or bullies and was not averse to taking care of them in a not-so-polite way.

In the intervening years, Sean has become more proactive in dealing with his nemeses, while Fiona has become more and more reactive and passive aggressive. She used to get a kick scrambling up orders in her parents’ Laundromat, for example, to make it seem that a husband has been cheating on his wife. Unhappy couples, she felt, who needed a push toward divorce. Meeting Sean again reminds fires Fiona’s anger at her parents and their (in her mind) old-fashioned superstitions and cultural values. She is sick of being a “Hello Kitty,” a term for Asian American women who are seen as harmless and, ideally, as voiceless:

I hate her for not having a mouth or fangs like a proper kitty. She can’t eat, bite off a nipple or finger, give head, tell anyone to go and fuck his mother or lick herself. She has no eyebrows, so she can’t look angry. She can’t even scratch your eyes out. Just clawless, fangless, voiceless, with that placid, blank expression topped by a pink ribbon.

Poor Hello Kitty. Having to go around itchy, unlicked, un-scratched. Tortured by her own filth.

Fiona doesn’t want to be like her mother, who “[a]fter nearly thirty years of marriage . . . still asks . . . for money to buy Payless shoes.” And in some ways she is not like her mother, at all. She has pictures of serial killers as her computer screen saver; her best friend is a serial killer who uses her to pick out his victims; and, at some point, Fiona refuses to tolerate the humiliation heaped on her by men.

It is this element of Hello Kitty Must Die that makes it a revenge fantasy. Sean, with whom Fiona has always been “half in love with” and half in fear with,” is exacting his own revenge on bullies like his father and “sluts” like his mother – “doing God’s work,” as Fiona puts it. There are many figures in Fiona’s life she would like to exact revenge on, and some seem to get theirs, while others don’t. Fiona is understandably enraged by the historical privileges afforded men, especially white men, and she spends much of the book skewering people like her parents for their old country superstitions, her anorexic, bleached-skin cousin, for telling Fiona she was too fat and too dark, her bosses, for demoralizing and harassing their associates and secretaries, and anyone else who is either a direct or indirect source of Fiona’s imprisonment in the dimensionless Hello Kitty stereotype. This aspect of the book is fueled by a refreshingly dark, twisted, and amoral sense of humor.

But Fiona is still her parents’ daughter. As much as she tells her parents she won’t marry any of the men they find for her, she continues to go out with every single one. If some of the people around Fiona seem to die early and unexpectedly, no one seems to notice anything amiss. Because Fiona is a “good girl” – she works 80 to 90 hour weeks at her firm and does what her parents say with only nominal resistance. She lets the reader know that the word for “yes” in Cantonese, “hai,” also means “cunt,” when said in a higher tone, so we know that every time she said “hai” to her father, she is aware of her abdication and her traditional place in the family as a daughter, not a son (or even the mother of sons).

This aspect of the book complicated the humor and stereotype-skewering for me, undermining the success of the dark satire. For example, when Fiona uses the word “hai” to her father, it felt like the affirmation of a Hello Kitty, rather than an independent, feminist woman who was trying to throw off the chains of her patriarchal Chinese-American upbringing. This image of Fiona as lacking agency – or, perhaps more accurately, abdicating agency – is reinforced by her decision to live at home so she could buy more designer shoes on her six figure salary. She feels so harassed by her parents’ old country superstitions and attitudes, and yet she willfully puts herself in a position of dutifully obeying her father’s truly hideous suitor choices and tolerating her mother’s passive acquiescence to a way of life that offends Fiona.

From this perspective, it becomes more difficult to completely sympathize with Fiona, or to simply vicariously enjoy her revenge fantasy. Comparing Fiona to her parents does not result in Fiona’s characterization as a stereotype-busting voice; to the contrary, Fiona becomes stereotyped in ways that similarly reinforces the very stereotypes her narrative superficially, at least, seems to critique. And because the satire exists at a relatively shallow level, I did not find enough self-awareness or self-consciousness in the narrative voice to view Fiona’s character, and her self-defeating critique, as meta. The irony of having a white male character be Fiona’s inspiration is not made less problematic by the fact that he is a serial killer abetted by Fiona’s own cultural victimization.

I have to admit that I had high expectations for Hello Kitty Must Die. Let’s face it; the title alone is killer. And the biting voice of the narrator is wonderfully entertaining for at least half the novel. The problems really become apparent as the narrative moves toward its ultimate completion, and various questions around where the story is taking Fiona and where it will leave her begin to weigh down the dark satire. It would be one thing if the shallowness of the narrative ensured an uncomplicated reading experience; although maintaining the reader’s engagement at that level requires substantial narrative control. The problem is that the issues on which the novel’s satire is built – gender, culture, family, various forms of morality – are already problematic enough to make impossible a purely superficial reading. Or, more accurately, they make impossible a purely superficial reading that shows the book in its best light.

There were also quite a few noticeable errors in the book, from Karl Malden spelled with a “C” to “cholericly” for either “colicky” or “choleric” (not sure which was intended) to simple typos I don’t think should be so prevalent in a professionally published book.

According to the bio at the back of the book (which highlights several superficial parallels between her life and Fiona’s), Hello Kitty Must Die is Choi’s first novel, and for me the narrative demonstrated a lack of maturity that made sense when I understood the book to be a debut work. Still, I have to evaluate it on its own terms, and on that basis, the book was ultimately a C read for me.