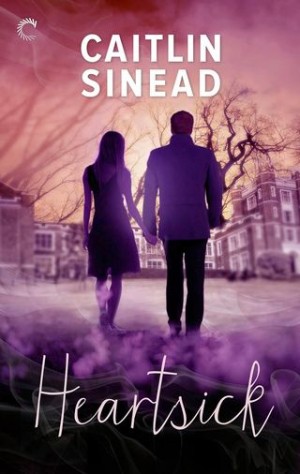 Your debut novel, Heartsick, falls into that category of new adult novels that pushes beyond the college-set contemporary romance glut the category’s fallen into. It still has the classic elements, complete with a love triangle, but it adds a mystery component and maybe a whiff of the apocalyptic. (Just a whiff, though.) Unfortunately, those discordant pieces never gelled for me.

Quinn wants to enjoy her senior year at college. She doesn’t want a serious relationship. She wants to figure out what to do with her not-so-career-minded art major. What she doesn’t want to do is contend with a mysterious virus that turns people’s eyes purple. Is it a plague? Is it a vehicle to create fast-healing super soldiers? Or is it the mark of the devil? These questions collide on an otherwise-quiet college campus.

Since Quinn is one of the first people to get violet eyes, she becomes the focal point of external aggression. A fanatical religious group stalks her. Resentful townies view her with suspicion. But as she delves into the virus’s cause, she discovers the source is closer than she thinks.

There’s a lot of stuff going on in this novel. Some readers may like that. I don’t. I prefer a little more focus and depth in my contemporaries. Those traits add intensity, which I crave as a reader.

First of all, there’s the love triangle between Quinn, Rashid, and Luke. Longtime readers of Dear Author know I’m done with love triangles. I couldn’t even muster my usual antipathy here. Quinn blows hot and cold with both men, pushing them away and then pulling them closer, but she didn’t strike me as confused. I got the impression she didn’t really want to have a committed relationship with either of them at all. She was just going through the expected motion. Because of this, the book’s ending didn’t ring true. I didn’t buy it.

The virus, its effects, and its origins make up the bulk of the book’s plot. However, there are so many things related to it, that it seems like five different plots instead of one. There’s the religious group’s presence on campus. The relationship between Quinn and her best friend, Mandy. The involvement of Mandy’s boyfriend, Zachary. The tension between college students and townies. The death of Quinn’s mentee, Danny. I can’t help but think that if a couple of these elements had been removed, the plot would have felt less scattered and meandering.

Heartsick is a book about secrets. Secrets like Zachary’s involvement with the virus and Mandy’s obsession to prove she’s not like her mother. Even secrets like what Luke actually does for a living or who Quinn’s father is.

But it’s the keeping of those secrets that cause the novel to fall flat. I’m still not sure I understand why Luke kept his being a cop a secret in the beginning. Especially since this is his hometown where the townies know him; it’s bound to come out. And keeping the identity of Quinn’s father a secret was really unbelievable. Not only did I not understand why it was kept a secret until the very end, it didn’t make sense for it to be. The book is told from Quinn’s first person present tense POV. That’s a very tight POV and for us, the readers, not to be explicitly told until the end of the book, seems like too much authorial interference. I don’t like seeing the marionette strings that clearly.

I appreciate that this book tries to do something different within the new adult genre. Sometimes I want something other than a contemporary romance. I just think it tried to do too many things decently instead of choosing to do a few things well. To be honest, I wish more page-time had been given to the existing tension between the townie and college student conflict before the virus.C

P.S. – If any readers know of any new adult novels that deal with the tension between college students and townies, I’d love some recs!