At this point, I think writing a review in this series would be hard to do and still manage to avoid spoilers so, though I’m going to try, I can’t guarantee anything. In “Hareton Hall,” you have Richard and Rose plus their daughter Helen and Richard’s brother Gervase, journey to Rose’s childhood home in Devonshire, all done up now, to witness two marriages. But by the time it’s all said and done, the smugglers from book two will make another appearance, a frightening disease will strike down a beautiful young woman and someone from Richard’s past will begin a plan of revenge. 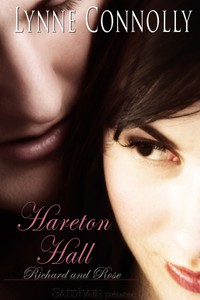 Though there are still things I enjoy about this series, I’m beginning to wonder if it hasn’t gone stale for me. The care you take with getting the historical details correct is a joy to me. Imagining Rose’s gorgeous new clothes and sumptuous jewelry is great fun. Reading about men who positively delighted in wearing lavender evening coats, powdered wigs and smallswords makes me swoon. And I’d love to witness some of Richard’s practiced, polished public moves: taking snuff, disposing of the skirts of his coat or making a magnificent leg to the lady of his choice.

It’s nice to see Rose’s family again and watch them settling into their newly redesigned old home place now made grand for James’s new Earldom. I see that it hasn’t changed his wife Martha’s practical nature nor her concern to be sure Rose is truly happy in her grand society marriage. I also like that Rose hasn’t forgotten those who were kind to her while she was growing up or that she’s not above a bit of Ladying it over those who snubbed her. She’s only human after all.

But there are some issues in the story and with the characters that didn’t work for me. The biggest is the way in which Richard deals with, or rather doesn’t deal with, the villain. I can see why Richard wouldn’t want to hand him over to the authorities but this is someone who threatened Rose – on more than one occasion, was willing to use germ warfare – which has affected the life of another young woman for life and which could easily have spread far wider, and who obviously isn’t going to reform. Just saying that he’ll have the person watched until that person’s inevitable downfall doesn’t cut it.

Since there is so little conflict between Richard and Rose, it all must come from others and frankly the whole smuggling subplot got boring. When I had finished the book and began thinking back, it hit me that it all just seemed to go on endlessly and meant nothing to me. The bit about their old enemies the Drurys also basically went nowhere until suddenly Stephen gets hauled front and center for a short act then dropped just as quickly. I also wanted to see a bit more about Lizzie and her fantastic wedding only to end up getting very little of this.

The Kerres have seen Richard’s love for Rose and now her family gets a taste of it. Rose has had her chance to do the “Lady Strang” thing in Exeter so I would hope that this will lessen in scope for any future novels. As well, despite the fact that Richard is *so* private about his feelings for Rose, he’s let them show so damn much that the whole country ought to know of them by now. Just get them the matching tattoos done and T-shirts to wear and drop this.

But my major disappointment with this book is the romance I’ve been awaiting for Gervase. Finally, finally Richard’s brother finds true love. After suffering heartache as a young man, then self banishing himself to India after which he returned and watched his twin find love with Rose, Gervase has been one I’ve wanted to see get his own HEA. I had an idea of who might turn out to be his love interest and wasn’t wrong. Yet, you don’t show him falling in love. Gervase simply confesses to Rose whom he loves and Rose finds out that the love is reciprocated and, ta-da! it’s over. Wha…t Where’s the suspense? Where’s the conflict? Nowhere and I felt cheated to have waited 5 books for this.

I’m not even sure that you plan further adventures for Richard and Rose though the ending of this one sort of leads me to believe there will be more books. After all there’re villains to deal with and one pissy younger sister of Rose’s to sort out plus an heir for Rose to produce. I just hope that Rose makes some more progress in becoming the grand lady and that I don’t have to read too much more about Richard’s public displays of his private feelings. C