REVIEW: Half a King by Joe Abercrombie

Ronnie from Paranormal Haven recommended Half a King to me, and it since I have another friend who enjoys your adult fantasy novels, it seemed like a good idea to give this, your first YA fantasy novel, a try. 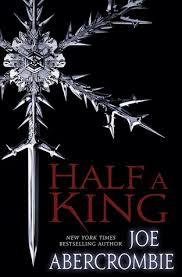 Half a King (book one in the Shattered Sea trilogy) takes place in a society inspired by that of the Vikings and begins with Yarvi, the second son of the King of Gettland, about to take a test that will strip him of his standing and make him a minister. Yarvi has a disability, a crooked hand, that limits his fighting ability, but he’s intelligent enough to make a good candidate for the ministry, an organization that advises the kings of the kingdoms around the Shattered Sea.

Before he can become a minister, though, Yarvi is informed by his uncle Odem that his father and brother are dead – killed at the hands of another king, Grom-gil-Gorm, who sent Yarvi’s father a message offering peace, but then killed him and his heir when they arrived to negotiate.

Yarvi is now the rightful king, but because of his disability, many in his ableist society see him as only half a man, half a king. Yarvi himself has internalized this view of himself (to a degree I found problematic—more on this later), and is intimidated by the thought of ascending to the throne and attempting to avenge his father and brother’s deaths as he must now do.

With his uncle Odem and his mother advising him, Yarvi soon becomes betrothed to his cousin Isriun. He also swears an oath to avenge the deaths of his father and brother, and then he and his uncle, as well as Hurik, his mother’s guard, sail to fight Grom-gil-Gorm’s people.

In the raid on their enemy’s kingdom, Hurik and Odem turn on Yarvi, revealing that they mean to kill him. Yarvi falls into the sea and is assumed drowned, but he comes ashore at Grom-gil-Gorm’s feet. Yarvi realizes that his uncle made up the peace offer from Grom-gil-Gorm in order to lure Yarvi’s father and brother to their deaths. To save his skin and survive to carry out his oath of vengeance on its true target, Yarvi pretends to be a cook’s boy and is sold into slavery.

Yarvi is purchased by a ship’s captain as an oar slave. On the ship, Yarvi presents himself as Yorv to his two oar mates and fellow slaves Jaud and Rulf. Together the three (as well as most of the crew) suffer hunger, cold, exhaustion and other privations. Yarvi bides his time, praying for an opportunity to escape and execute his revenge on his uncle. Eventually, though fraught with danger, such an opportunity does arrive….

Half a King has strengths that impressed me and weaknesses that frustrated me a great deal. I’ll start with what I liked.

My favorite part of the book was the middle section, in which Yarvi escapes slavery and finds a group of allies with whom he bonds. I don’t know why but while I don’t find hardship at all appealing to live through, I really enjoy books in which characters have to survive in difficult conditions and discover strength and endurance that they never knew they had. This part of the book had all that and I enjoyed it a great deal.

The voice of the story is distinctive too—here’s a paragraph of description to show what I mean by that:

Yarvi’s stomach was in his sick-sour mouth as they crested one surging mountain of water, was sucked into his arse as they plunged into the foam-white valley beyond, pitching and yawing, deeper and deeper until they were surrounded by the towering sea on every side and he was sure they would be snatched into unknowable depths, drowned to a man.

Whatever one thinks of that style, whether one likes it or doesn’t like it (it took me a lot of getting used to), one can’t deny that it’s vivid and descriptive. It feels deliberate in its musicality, which isn’t the case with every book.

The plot goes in unexpected directions and toward the end of the book, there are a couple of big twists I didn’t see coming. Since I’m usually able to anticipate surprises this was something I enjoyed. When I say the twists are big, I mean that they are the kind of twists that cast the entire book in a new light. I could envision reading it again with a new understanding I didn’t have the first time, and enjoying it in a different way, if it weren’t for the frustrations I encountered.

Of these frustrations, the biggest was the way Yarvi’s disability was portrayed. Since Yarvi was born with his weak and crooked hand, he has had his entire lifetime to accept this fact. But unbelievably, he hasn’t. Throughout a good portion of the book, he wishes, over and over, for “Two good hands.” It is almost a refrain of his, and it didn’t take me long to get fed up with it.

I wanted Yarvi to get over his ableist self-pity and move on, find something active and interesting to do in the story besides whining and being victimized. He does, eventually, but it took a good chunk of the book to get there, and I gave serious consideration to quitting because of it.

Yarvi also spends most of the first third of the book with very little agency, either as the puppet of his uncle and his mother or as a slave. What all this added up to is that I didn’t like him that much until the middle section that I mentioned earlier. Then, just as that section was coming to a close and I was rooting for him, Yarvi made some questionable choices that made me view him with less liking than I’d felt in the middle, and that remained the case for much of the final third.

Without giving away the plot turns at the end of the book, the first of these twists confused me initially, and the second left me with some uncertainty about the direction of Yarvi’s character arc. Still, I think if hadn’t been for his attitude toward his disability, I would have liked Yarvi and the book more. C.