One advantage of being offered books for review is that it has made me more adventurous as a reader. Even reading a bad book has some value to me if I can get a review out of it, so it’s not as much of a risk for me to take a chance on an unknown author. 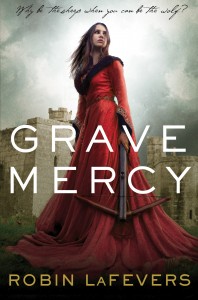 I requested a copy of Grave Mercy on a whim; the blurb intrigued me. It is not a bad book, but I can’t say it was very successful for me. While the concept is interesting indeed, the execution felt strangely flat.

The story is set in 14th century Brittany, in an alternate world that diverges somewhat from historical fact (the world also contains some magical elements). Ismae is 14 years old and about to be forced into marriage to a brute by her equally brutish father. Rumor in their small village has long held that Ismae’s father is not her real father at all, and that she was instead sired by the god of death himself, St. Mortain. This is supposedly the reason that Ismae’s (long-gone) mother tried to abort her; obviously she didn’t succeed but Ismae bears a long, ugly scar on her body as a reminder of the poison that failed to expel her from the womb.

Ismae’s wedding night goes awry and she is beaten and then locked in a cellar by her husband; she is rescued by the very same herbwitch who had tried to abort her years before, and taken to the Convent of St. Mortain. Here Ismae discovers her value, as well as some special gifts. For one, she is largely impervious to poison; what would quickly kill another might make her mildly sick for a brief time. As the story unfolds, Ismae discovers other powers that touch on her unique relationship with death.

The nuns of St. Mortain train their charges to be assassins in the service of their god. (Mortain is called a saint to make him fit – more or less – into the Christian pantheon, but he and other saints were clearly repurposed from an earlier belief system.) For Ismae, serving Mortain means working with poisons and learning other skills that will make her deadly. When she is 17, she is sent out to make her first kill; her target is a traitor working for the French against the interests of Brittany’s ruler. The job goes off fairly successfully and Ismae is relatively free of guilt, which I appreciated.

The nuns of St. Mortain have various resources at their disposal that help them determine who to target for assassination. The convent has an elderly nun who acts as a seer. The assassins themselves can perceive a “marque” on the bodies of their victims that confirms that they are marked by St. Mortain for death (usually in the form of a shadow or smudge that may appear in the spot where the killing blow is eventually struck). It becomes evident though that the nuns are politically connected as well, and at least some of the killings (specifically, those that Ismae is involved in) are linked to the struggle between France and Brittany and perhaps based on information from outside sources who might have their own agendas.

Ismae struggles with her gratitude to the convent, her desire to be obedient, and her sense, which grows stronger as the book progresses, that the nuns of St. Mortain are not as infallible in their judgments as she’s been led to believe. Her disquiet increases when she is given an important assignment: she is sent to the court of Anne, Duchess of Brittany, the ruler whose control of the realm is threatened by the French. Ismae accompanies Gavriel Duval, a young and serious noble who happens to be Anne’s illegitimate half-brother. Ismae has been warned to keep an eye on Gavriel as the convent suspects he may be acting against Anne’s interests, but the idea of having to eventually perhaps kill him becomes more difficult as the two grow closer.

There’s a lot going on in this book – there is Ismae’s coming-of-age, as a woman and an assassin, the mythology of the alternate world the author creates, with its unfamiliar saints and fables, and there’s political intrigue. A lot of political intrigue. I’m not opposed to political intrigue as a matter of course, but I think it interests me more when it involves real history. Even so, fictional historical intrigue could be made interesting to me, but this just wasn’t that intriguing. Anne (who I was suprised to realize, late in the story, is much younger than I’d thought – around 12) is beset by potential enemies at every turn. She needs to marry to secure her kingdom’s safety from the French, but none of the prospects are appealing (the most persistent one is a dirty old man old enough to be her grandfather). She can’t trust all her advisers, but she doesn’t know which are truly and actively working against her and which are merely trying to push her in one direction or another for personal gain or because they honestly believe they are acting in Brittany’s best interests.

When I read back the description of the plot so far, I keep thinking that this sounds like a great book. That it wasn’t great isn’t attributable to any one thing, but a dozen small pieces that are missing: a great heroine, a great hero, a compelling love story, an intriguing villain, sparkling writing, a conflict worth taking a rooting interest in, surprising plot turns, a fantasy world that really came alive. If even a few of those elements were there, the book would’ve worked a whole lot better for me. As it was, it’s a book with a great set-up that was mediocre in every other way.

I would’ve liked Ismae better if she had been better at being what she was trained to be. In a way, her hesitancy was understandable: when the bulk of the story takes place Ismae has a handful of kills under her belt, and she’s still just 17. But one does get so tired of heroines who end up being something less than the bad-asses they were advertised to be. Readers who are ambivalent about assassins or tough heroines may actually prefer Ismae as she is. I don’t necessarily favor kick-ass heroines over other types, but once I expect a heroine to be kick-ass I get excessively annoyed when she doesn’t deliver. Ismae wasn’t incompetent, but she was far from kick-ass. For an assassin, she’s really kind of insipid. The most remarkable thing about Ismae is that she’s good at not dying of poison, and that’s not really something she gets the credit for.

The relationship between Ismae and Gavriel is pretty tepid. They are obviously attracted to each other but have so many missed connections that their romance quickly became frustrating to read about. I wondered how old Gavriel was supposed to be because at times he’s portrayed as sort of romance-hero-supercompetent, which suggested that he was a bit older (closer to 30), but other times he seemed quite young. I didn’t actually want him to be that old because Ismae is really a pretty young and sheltered 17-year-old, for all that she kills people for a living.

I couldn’t decide if the YA designation was appropriate for this book or not. The assassin theme would probably relegate it to suitability for older teens, mostly, but I’m not sure they’d be that interested in all of the political intrigue (I mean, I wasn’t that interested in the political intrigue). There was a certain lack of sophistication and complexity in the writing that’s reminiscent of other YA books I’ve read, which I guess is not exactly a compliment, but what I’m trying to say is that it did read like a YA to me in some ways. Even when serious things happen – murders, attempted rapes, attempted murders – it didn’t really feel too intense or scary. I think the writing felt like it was for a younger teen but the plotting for an older one. There was one very discreet sex scene.

Ultimately, the problem with Grave Mercy was that in spite of the intriguing possibilities presented by the concept, the book itself was just bland. My grade is a C.