Last year I read your debut, Anna Dressed in Blood. I loved it. It was a creepy ghost story about a ghost hunter on a mission to track down a violent, bloodthirsty ghost but ends up falling in love with her instead. Sometimes I think the urban fantasy subgenre has made us forget that its supernatural denizens can be very scary. Anna, the titular ghost, while a tragic figure, never let us readers forget the threat she posed. There were some surprisingly gory scenes in that novel, and I think calling it a horror novel rather than an urban fantasy is more accurate. It wasn’t a book for everyone but for those of us who miss the scares and thrills of darker fiction, it was a welcome change. So after such an auspicious beginning, I looked forward to your follow-up. 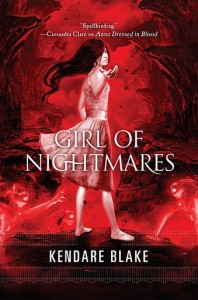 Anna Dressed in Blood, we met Cas — a ghost killer who bounced from place to place, tracking down ghosts and killing them. You could say it runs in the family. We also meet Anna Dressed in Blood, a murderous ghost named so because the white dress she died in is stained with the blood of the people she killed in her afterlife. At the end of that novel, Anna saves Cas’s life but at the cost of her own soul.

Girl of Nightmares opens several months later. Despite being done with the job that brought him to town, Cas hasn’t left. It’s out of character but a part of him can’t bear to leave the place where he met Anna. To say he’s obsessing over her is an understatement. His friends, Thomas and Carmel, constantly try to take his mind off things but to no avail. He just can’t forget her.

Then he starts having nightmares about her and seeing her everywhere. This should be impossible because logic dictates that she’s on the other side. But soon Cas realizes that Anna is in hell. Some people would say this is what she deserves. Even though she operated under a curse, Anna killed a lot of people. But Cas can’t leave her there and soon his obsession turns to a fervent desire to bring her back. And he’ll do anything — and ally himself with anyone — to make that wish come true.

I’m not sure if it’s just me but I found this to be a very different read from Anna Dressed in Blood. I fell in love with the creepiness of the first book. I wanted more of that here. Unfortunately, I didn’t quite get it.

Anna’s presence in the first book really made it for me. She was a powerful force. While it suited the storyline here, it was a little depressing to see her relegated to a damsel in distress role. She became an object for Cas to rescue and what flashes of creepiness we did see stemmed from her various tortures in hell. I can’t say that really sat well with me.

I was also confused by the supporting characters’ reactions to Cas and his obsession over Anna. When he starts seeing Anna everywhere, it seemed to me that most of them assumed he was crazy and simply hallucinating. I realize that bringing him to a therapist may not have been optimal, given the nature of Cas’s job. What would he say to them? “Oh, I think the ghost I came here to kill is haunting me?” That’s not going to go well. But when he makes it clear that he wants to bring Anna back, there’s a whole lot of You’re messing with forces you don’t understand and Stop what you’re doing now, which suggests they don’t think he’s crazy at all and that something bad is about to go down.

Which brings us to my pet peeve. If the so-called experts of the story know something bad is going to go down — and that Cas and Anna are at the center of it — why would you not actually bother to share that information with the interested parties? That is stupidity. It’s also withholding information for the sake of withholding information for no good reason other than to artificially manufacture narrative suspense and tension.

About halfway through the book, Girl of Nightmares goes in a new direction. It involves Cas’s bloodline and the legacy of the athame he uses to kill ghosts. Let’s just say there are druids, secret societies, magic rituals, and dimension hopping. I understand the need to expand the world, especially if the goal is to sustain a series-long conflict, but this is not what I signed up for. The more we delved into the background and history of Cas’s family and his weapon, the less excited I became about where the story was headed. To say I was disappointed is an understatement.

I think many readers will be excited about this development. It does expand the world and provides enough fodder to sustain a series. But I originally signed up for a book about a ghost killer and the ghosts he hunts down. I did not come aboard to learn about a secret society of druids and their sacred ghost-killing warrior and his mystical weapon. I guess it takes the creepy charm out of it and that was what I was here for. I also think that storyline overshadowed the emotional punchline, which was Cas’s obsession with Anna, who is already dead, and his inability to let go. Given the way things panned out, I’m not sure I’m on board for another book set in this world. I guess we’ll have to wait and see. C

→ Jia
Previous article: Monday News: Why I am not in love with the romance documentary; Amazing scientific advancement improving life of children
Next Post: Guest Post by Karen Robards