This is a two story collection and while the world was intriguing, I felt like I was only given tiny glimpses of what could be instead of a full fledged immersion into a new world. I’m not sure if it was because of the two story structure or whether the teasing reveal was an intentional way storytelling choice.  The two stories are told from the point of view of the Sword and the Chalice of Queen Idony.

Much of the worldbuilding is a mystery and it hampered my enjoyment of the stories, particularly the first one.  By the time I had reached the second, I had a more fulsome understanding of what was going on, but the setting, politics, intrigues, were still pretty nebulous. 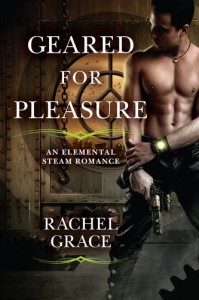 We open Earthly Desires with young Dare, the chalice for Queen Idony whom is some kind of diety to the land, a powerless diety who has been kidnapped.  Dare is one half of Queen Idony’s entourage.  There is the Sword (Cyrus) and the Chalice (Dare).  What purpose these two serve isn’t revealed for some time.

Dare receives a message encoded from the Queen to seek out a ship called Deviant.  Without much skill, Dare embarks and is kidnapped, saved, brought aboard Bodhan’s submarine brothel, Siren.

A lot happens to Dare, but she is not the instigator of action which made me wonder about her abilities.  References are made to her as a shield guard and engaging in feats of amazing resilience but she is presented as this diminituve almost child like person. Where is her wit? her strength?

Perhaps because of the shortness of the story, Bodhan and Dare engage in sexual activities quickly despite Dare being a virgin.  (The quick movement in the book from set scene to sex scene was problematic in the second book as well but for different reasons).  Dare had never been outside of her land, her main companions being the Queen and the Sword.

There are a number of great ideas brought up in this story.  Bodhan is a flesh peddler yet his ship serves as a safe spot for many women to sell their services.  Dare is a diminutive but has a strange power that lends her strength.  The world is intriguing and mysterious.  Unfortunately, none of these interesting things were teased out. I was impatient during the sex scenes, feeling like the couple wasn’t ready for that type of action and the word count could have benefited from more world building and secret revealing than sexual pleasure.

This entry tells the story of the Chalice or Cyrus.  Cyrus was sent on a mission and was sold into bondage through an unfortunate encounter with Seraphina, a Felidae.  Felidaes are a creature that appeared part human, part thing. (Tail, ears and claws).   Initially Seraphina was portrayed as amoral, completely beholden to her own interests, often sexual in nature.  She appeared to be at least bisexual.  In Fiery Temptations it seemed like there was an attempt to redeem her.  She wouldn’t have given Cyrus up to the people who paid her for him had she known how he would be treated, she asserts.  I liked her more when she was consistently self interested because the transformation would have been more interesting.

Cyrus was a more typical romance hero – strong, tall, and protective in nature.  His pride smarting from being deceived, he nonetheless desires Seraphina like an addict seeking another hit of a bad drug.

This story focused a bit more on revealing the secrets of the world building and because I thought the world was so interesting, I liked it much more than the first.  I was frustrated whenever we cut away from the pursuit of the answer to the mystery for Cyrus and Seraphina to have sex or flirt. I wanted less about their relationship and more about the setting and the mystery subplot.