REVIEW: Fury of the Phoenix by Cindy Pon

I read your debut, Silver Phoenix, when it was first released and enjoyed it. Like Jane, I’m a big fan of multicultural stories and it was wonderful to see a YA fantasy featuring a setting based on ancient China. So I’ve been looking forward to your follow-up for a quite a while. I wish I could say the wait was worth it. 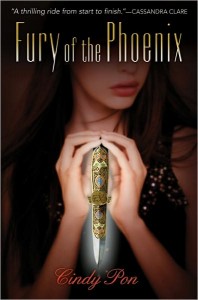 Silver Phoenix ended on a bit of a cliffhanger regarding the romantic subplot. It was a very bittersweet ending that left me wishing and hoping that Ai Ling’s story was not over. Ai Ling accomplished her goal, but she didn’t get the guy. How sad is that?

Fury of the Phoenix picks up where Silver Phoenix ended, with Ai Ling tracking down her love, Chen Yong, because she’s been having terrible dreams warning of danger to him. Most people would assume these dreams mean nothing or are just a nocturnal manifestation of her subconscious. But Ai Ling knows a thing or two about the supernatural and fantastical, so she trusts her instincts.

Chen Yong has decided to seek out his birth father, a foreigner not of the kingdom of Xia. The journey involves a long sea voyage to his father’s homeland. Ai Ling decides to join him, even if it means sneaking aboard the ship.

But the journey doesn’t proceed smoothly. For one, Chen Yong is not thrilled to see her. For another, Ai Ling is plagued by guilt over events that took place in Silver Phoenix. And worst of all, her nightmares and visions give her insight into her nemesis, Zhong Ye, whom she thought she’d defeated.

I think my less-than-enthused reaction to this novel is due to a combination of factors. I’ve been anticipating Fury for a while now and despite my best efforts, sometimes a long wait time results in raised expectations. I try not to do this because raised expectations have burned me numerous times in the past but it’s difficult to do that when we’re talking about Asian-influenced fantasy. I love Asian-influence fantasy so I’m constantly hoping the next story will be the one that breaks out.

But more than that, I think the kind of story Fury of Phoenix tells is not the one I was expecting, nor the kind of narrative I wanted. I’d hoped for more fantastical adventures along the lines of what we saw in the previous novel. There’s a sea voyage and a new country to explore. And while we were treated to menacing pirates and some family intrigue concerning Chen Yong’s father, these scenes were overshadowed by the secondary narrative.

And this is my main problem about Fury of the Phoenix. The novel is split into two storylines: one about Ai Ling’s present and one about Zhong Ye’s past. Zhong Ye, for those readers new to these books, is the villain of Silver Phoenix. His inclusion is the root of my dissatisfaction. I thought we were done with Zhong Ye. I thought we would move onto other adventures, other opponents, other goals. Instead, we were given a retread.

Part of it is that I personally don’t care to see villains redeemed, especially when they were portrayed in a particularly heinous way. I have no interest in such narratives. I also have no desire to read stories about how love can destroy us by leading us astray because it can make us do horrible things. That is not a story I care for in any way.

On top of all that, we also discover everything we thought we knew about Silver Phoenix and the circumstances leading up to her death was wrong. Maybe if there had been some hints of this in the previous book or maybe if recasting the story served some purpose, I’d like this aspect more. Instead I was left questioning what the point of it all.

But it wasn’t just Zhong Ye’s half of the book that gave me problems. It was also Ai Ling’s interactions with Chen Yong. Maybe I’m just looking back with rose-colored glasses, but I remember really liking the romantic subplot and their relationship. Here, their interactions left me cold and at times were wooden and 2D. Their relationship just did not develop in a way that was organic or believable to me.

On the other hand, I still enjoyed the setting. Even though much of Ai Ling’s storyline took place on a boat and in a foreign country, we still got to see much of the Asian setting through Zhong Ye’s eyes. I personally don’t recommend reading this book on an empty stomach because like its predecessor, the food descriptions made me hungry.

I did finish the book so despite my complaints, it wasn’t a DNF. That said, I suspect how readers receive this book will depend on their feelings towards Zhong He’s narrative. It makes up a significant portion of the book, so it can’t easily be ignored. And at times, I thought it overshadowed Ai Ling’s storyline which is a shame because Ai Ling is the character I wanted to read about — her journey, her story, her growth and evolution as a person. Instead, I got the tale of a man’s fall and how it impacted a poor girl in the present. As for the cover, I have nothing to say about it that hasn’t been said already. C