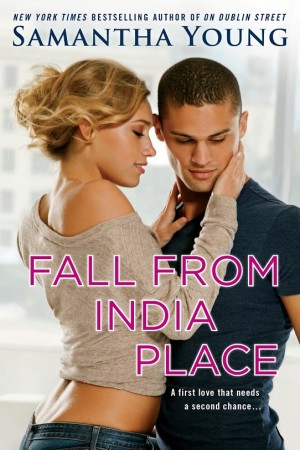 Your On Dublin Street series is a total winner for me, with each annual release being among my Top 10 favorite books of the year for the last three years running. So requesting Fall From India Place was a no brainer.

When Hannah Nichols last saw Marco D’Alessandro five long years ago, he broke her heart. The bad boy with a hidden sweet side was the only guy Hannah ever loved—and the only man she’s ever been with. After one intense night of giving in to temptation, Marco took off, leaving Scotland and Hannah behind. Shattered by the consequences of their night together, Hannah has never truly moved on.

Leaving Hannah was the biggest mistake of Marco’s life—something he has deeply regretted for years. So when fate reunites them, he refuses to let her go without a fight. Determined to make her his, Marco pursues Hannah, reminding her of all the reasons they’re meant to be together….

But just when Marco thinks they’re committed to a future together, Hannah makes a discovery that unearths the secret pain she’s been hiding from him—a secret that could tear them apart before they have a real chance to start over again….

We met Hannah Nichols in the very first installment of On Dublin Street and have watched her grow up, and had hints at her burgeoning relationship with Marco D’Alessandro throughout the series. The book opens a few years after the previous books in the series and Hannah is now an English teacher enjoying her first year of teaching. She’s invigorated by her students, and is as close as ever with her family. But she’s haunted by her relationship with Marco, which ended abruptly after she gave him her virginity and he literally disappeared the day after. She’s not heard from him or seen him since, although rumor has it that he left Scotland altogether and went back to his native Chicago. This at first left Hannah bereft, but that bereavement has turned to a smoldering anger and an inability to move on from the relationship and give another man an opportunity to win her love.

So imagine her shock when she runs into Marco at a friend’s wedding, and imagine her fury when he informs her that he’s been back in Scotland for four years, and never got in touch. But now that he’s seen her again, he’s ready to make the full court press to win back her love. Hannah is incensed. He broke her heart and left her to pick up the thousand pieces of it and to deal with the ramifications of their actions that night all alone. On top of that, he came back to Scotland years ago and never bothered to get in touch. There is absolutely no possibility of them reconciling in any way. But Marco is determined. He’s a changed man. Grown up and deeply regretful of the heartache he caused Hannah. He wants nothing more than to go back to the place they were before. Best friends and lovers. After him showing up multiple locations to push for something more, Hannah agrees to have a drink with him. She informs him that they will only ever be friends, and that if he can accept that, she’ll give it a try. Marco agrees, but tells her that he’s not going to stop trying to win her love. After spending time just hanging out with him, Hannah is no less attracted to him. He’s funny and supportive and kind. Soon, Hannah acquiesces and they act on their deep mutual attraction. But both are hiding something huge which could affect their relationship forever.

This book should have worked for me. I love reunited lovers as a trope and your authorial voice is one that has always worked really well for me. Marco is a dream of a hero. Yes, he has secrets, but he’s in hot pursuit of Hannah (another trope I love) and he’s everything one would hope a hero would be. Unfortunately, I didn’t like Hannah. I felt that throughout the book she displayed an incredible amount of immaturity, and sister can hold a grudge! She sent Marco mixed signals galore and every time the going got tough, she ran for it. Often after saying something particularly nasty to Marco. The fit she throws when she finds out Marco’s secret is epic and unsupportable in my opinion. They had already exchanged “I love you’s” at that point and yet, at the first sign of trouble, she cuts and runs. It made me dislike her intensely. I kept hoping Marco would find a more mature, kinder woman to love. Hannah acts like an entitled brat throughout the book, which made it impossible for me to root for her at all.

That being said, I really enjoyed getting to visit with previous couples in the series, and I love the setting of the series very much. I liked Marco and could easily understand why anyone would fall in love with him. He manned up for what he did, and spent most of the book doing everything he could to win Hannah’s love. Those parts of the book make me inclined to grade it a little higher than I would if I were going off of Hannah alone. In the end, I believe this is the weakest installment of the On Dublin Street series, but I’m still beside myself with excitement for the next installment, which is Cole’s love story. Fall From India Place receives a C from me.