REVIEW: Face Off by Nancy Warren 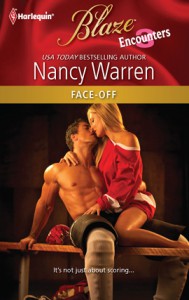 In keeping with our unintentional sports week here at Dear Author (what with the reviews of Icebreaker and Huddle With Me Tonight and my Ode to Donald Driver), I thought I should go ahead and post a review of your latest Blaze release. In the past couple of years, I’ve really come to look forward to your Blaze books. They seem modern in tone and I’ve liked that you’ve included multicultural characters in your books. Unfortunately, in Face Off, I felt like the space constraints really limited the stories you were trying to tell and ultimately the romances suffered for it.

Face Off is a compilation of three shorts focused on the romances of the three McBride siblings. First up is Jarrad McBride, a former hockey star whose last body check left him with reduced peripheral vision and ended his hockey career. Jarrad’s despair over no longer being in the NHL is compounded by the fact that his swimsuit model wife divorced him and hooked up with an NBA star (trading up or so say the tabloids). At the urging of his best friend, Greg, Jarrad returns to his hometown in Vancouver to help Greg and his fellow policemen and firefighters field a hockey team to play in the The World Police and Firefighter Games hockey championship. Shortly after arriving back home, Jarrad finds himself inept at coaching but his troubles are soothed by meeting Sierra Janssen, an elementary school teacher at the hockey rink. Sierra has been roped into learning to play hockey with some girlfriends. (I guess they have girls’ leagues in Canada?).

The problem isn’t the setup. I could buy the setup. It’s that the story is told in fast forward. We go from meet and greet to bed to I love you in a whirlwind matter of hours it seems. Whatever emotional trauma either were suffering was a convenient overlay on top of two or three scenes that provide the basis for the romance. Unfortunately this might have been a story I could have really enjoyed had it been more than just a sketch. Both Sierra and Jarrad were drawn as sympathetic characters but the romance was unbelievable and contrived to me in the tiny space it was allotted. D.

In The Sin Bin

Samantha McBride stars in the second novella. She is a hotshot lawyer whose high school sweetheart is her brother Jarrad’s best friend, Greg Olsen.   Greg had once proposed to Sam on the eve of her leaving for law school but instead of viewing it as a romantic proposal that would cement the relationship that they had built since they were teens, Sam viewed it as Greg’s attempt to control her and a sign of his belief that she wouldn’t be faithful to him.

Despite living in the same city since she became a lawyer (or is it barrister in Canada?), Sam and Greg have managed to avoid each other but neither stops thinking of each other.   Reunited lover stories almost always work better in a short space and I think because there was past emotion that the reader could fill in, this story worked better.

However, I wasn’t sure that whatever had been the main problem between Sam and Greg was ever resolved ten years later.   Was Sam afraid Greg wanted to control her? He never evinced any such desire.   He was never, even in reminisces, portrayed as an overbearing control monger.   Was it that Sam just wasn’t ready to be married and now she was?   It appeared that most of the story was told from Sam’s point of view and thus Gabe’s emotional arc was a definite afterthought.   C

This last story worked the best for me but ultimately lacked the proper build up like the others.   Taylor McBride has been invited to participate in a charity event wherein he will dance with silver Olympic figure skating medalist Becky Haines, Canada’s Skating Sweetheart.   Taylor is on the farm team, trying to make it to the big leagues like his big brother.   Becky is working on winning the gold.

The two go from meeting to sniping to meeting in a bar to the bedroom.   In one day, I believe, although it’s not explicitly laid out as such.

Becky’s entire life is regimented from the time she gets up to the time she goes to bed by her mother who arranges for her publicity events to her militant coach.   Yet, despite being told this, Becky is shown slacking off her duties to have sex with Taylor almost immediately.   There was no indication previously that she had anything but the gold medal in mind.

Taylor had almost no sibling rivalry with his older, more successful brother.   His only concern was dropping Becky.   I really, really appreciated how much respect he had for Becky and her athletic endeavors.   I found that refreshing.

Ultimately, though, I struggled with the love relationship of the two and thought that the epilogue was overly treacly.   Two weddings in the planning stage and one more to come!   I mean, I appreciate the solidity of the HEA but I think I wished that the words had gone to building up the relationships so that we could have figured out the epilogue without it being explicitly stated.   C

If a reader can set aside the need for emotional buildup and accept the relationships as they are presented, these stories provide a short, fun read. I liked all the characters. I liked the setup.   There was believable conflict and backstory.   Essentially there was a ton of promise, but I was terribly disappointed in how everything seemed to be getting the short shrift from emotional development to character arc.

(Kindle link not working at this moment) | Amazon