It has been well documented that lately I’m all about the rock stars, billionaires and fighter heroes in my romance. I requested your book because it features a fighter named Dante “Inferno” Jones, an MMA fighter who has come to town to train with one of the toughest, most demanding coaches on the circuit. He meets Caitlyn Moore after a fight at the Boot Scoot a local hangout where the “after party” is going on. 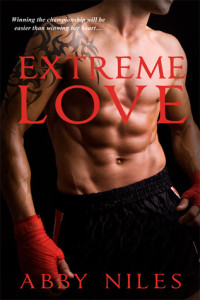 Cait’s best friend, Amy is dating a fighter named Brad and she’s insistent that Caitlyn meet him. Brad drags along Dante to meet the girls. Cait is overwhelmed by Dante. He’s good looking, physically fit, and very obviously interested in her. Dante’s instinct is to begin an immediate pursuit of Cait, flirting and trying to get her interested in a fling while he’s in town. What he doesn’t know is that Cait has recently lost a ton of weight, but still sees herself as overweight and ugly. She’s shy in the extreme and overwhelmed by Dante’s pursuit. Despite Amy cautioning him to go slowly with Cait and get to know her on a friend level, Dante can’t seem to help himself. He wants Caitlyn more every moment.

As Caitlyn leads Dante on a rollercoaster of will she/won’t she, he becomes very distracted from the Welterweight championship fight he has in a few weeks. His training begins to suffer. His opponent is the current champion, and if Dante wants to win the fight, he’s going to have to put his complete focus on the fight. Will his pursuit of Caitlyn endanger his chances of winning the fight?

This was what I call an “easy read” book. I blew through it in about two hours. It held my attention and entertained me. That being said, I did have some issues with the way the book is written. Dante is pretty much your ideal hero. He’s desperate for Cait, willing to go slowly to woo her, wants nothing more than to protect and take care of her. He’s attracted to her curves and beauty and somehow sees what a beautiful person she is on the inside. My problem is that, I’m not sure I really got the attraction. Listen, I’m all for awkward heroines. And I liked the idea of a woman with body-image issues. My problem is that Cait read to me as a very weak heroine. She dithered, wasn’t very friendly, tended to be a bit snotty at times, was impulsive (and not in a good way) and almost pathologically shy. I guess I didn’t really understand why he was so desperate for her. There were a ton of scenes where her friends were encouraging her, but not enough scenes building a foundation for that friendship. I didn’t understand why everyone was rooting so hard for her. She just wasn’t that likable. Therefore, I had a hard time buying Dante’s single minded pursuit.

The book also suffers from a cookie-cutter bad guy. I mean this guy is EEEEVIL. To the point that he should have been incarcerated. He basically kidnaps the heroine twice, and nothing is ever done about it. He felt like a major contrivance to me, and not one that I bought at all.

Despite all of these things, I’d definitely read more from this author. I liked the hero very much, and I thought that chemistry between the leads, once they finally hooked up was sweet. I just wish that the story didn’t feel quite so forced and that the heroine had been someone I was rooting for more. Final grade: C-